Skip to content
Cross-posted from: The Daly Woolf
Originally published: 16.05.16 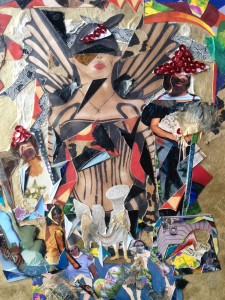 Naming a new, emerging creative project is like naming a cat; you just know when it’s right.  My new intermedia story art project,  Nine Uncanny Women Who Live in Your Neighborhood really began to emerge more fully when I was studying this astrological happening involving a newly discovered (2005) planet (controversy abounds; no, yes, no, yes, yes, no on the planet question) Eris (pronounced ee-ris) and Uranus.  They are meeting up in what is known in astrological parlance as a conjunction….hanging out next to each other…..a few million miles away, but you get the hang of it.  They haven’t been this close for 500 years or so.  The mythology of Eris is what caught my attention.  She’s famous for being an agitator;  a hard core Truth Teller, a disruptor of the status quo, a badly behaved troublemaker, a dissenter.  We know who wrote her story. Patriarchy hates her and her ilk; radical feminists…..the Biophilic Warriors among us.  Uranus, the revolutionary fire brand who dislikes stasis and confinement, meets the radical truthspeaking feminist Eris in the searing rebel constellation of Aries; now that’s a party I want to be at!

This is where the story grabbed my attention: Eris wasn’t invited to a family wedding because they feared her powers.  They didn’t want a grimalkin to cast any dark shadows on the affair, so they hurled her out.  Well, she showed up anyway and threw an apple (there it is again, that apple!) at a table full of women attendees. The story has some twists and turns, but in my way of thinking through the patriarchal myth, I believe she challenged them to a truth (apple) from the great tree of knowledge….Her Tree of Knowledge and Wisdom.  That table full of women of course were dressed to the nines and were behaving as they were required at an affair such as this. Eris arrived and revealed some Truth; be-spelling, be-witching, be-speaking a cipher that no one, no one wanted to hear or see. I suspect there was a drunken brawl that followed, and things were upturned and heaved over retaining walls, as it is her nature that shenanigans and mayhem break out when Eris threads her needle.

I too have recently  been outcasted by family.  Not only not invited to the gala wedding, but written out as if I never existed.  Eris and I have a few things in common, and we know how to exist creatively in solitude.  But one cannot stay, as Snow White reminds us, in the state of shut down forever. And so we rise-up, hot to trot.

Eris and I are working to set the record straight and she has asked me to help restore her back into the relevance of the cultural narrative.  She will not go away, and she will continue to show up at weddings and other fanciful and somber events. So along with Ceres, Pallas, Juno, Vesta, Lilith, Hygiea, Hekate, and Venus; the ten of us are in the trenches, storying it up, re-membering  what has been dismembered, behaving badly, courting discord, and picking bushels of apples( for apple pie, apple butter, and apple strudel) from the famous Eris Orchards!

Oh Yes, and my grimalkin partner in trouble-brewing and sniffing out the details, Mother Rosetta, is on the job….so have no fear- 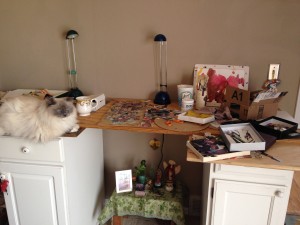 The Daly Woolf: An Uncanny Journal of Memoir, Poetry, and Cultural Analysis – I am a feminist writer/intermedia story artist and the executive director of Satori Instititute. I live in Boulder, Colorado. The Daly Woolf is an essay driven journal of memoir and cultural analysis. My twitter handle is rebecca9