This post is a footnote to the point already made by Columbia PhD student @SimonMStevens (which I saw via Africa is a Country), about the ubiquity of the acacia tree silhouetted against an orange sky on the covers of works of African literature.I had my interest piqued by the collage Simon put together, and I wondered about what might be revealed by further comparison with non-fiction books on the topic of ‘Africa’. Because of my research interests, I narrowed my search to include books only about Kenya. Here is what I found: 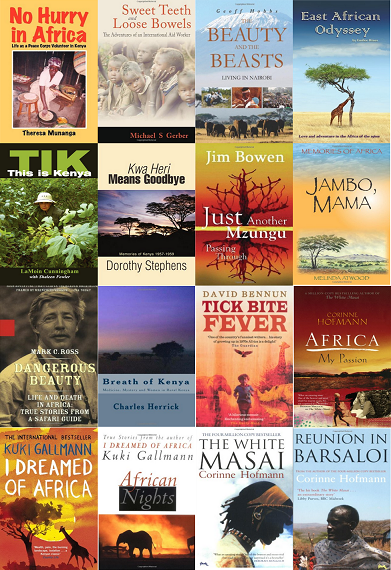 The majority of the covers of non-fiction books I saw conformed to the stereotypes that were suggested by the original post. There was more variety in the book covers than I was expecting, but a number of commonalities emerged.

In the above collage, aside from the acacia trees and sunsets, there are also numerous elephants and giraffes; and any African people who are pictured are what might be described as dressed stereotypically ‘traditionally’ * (notably the depictions of Masai men on the covers of Corinne Hofmann’s memoirs, in the bottom right of the collage, which seem to refer to the British colonial perception and treatment of Masai people as noble savages).In addition to the images used on the covers, I think it is interesting to note the use of Kiswahili words and phrases in the book titles (i.e. kwa heri, jambo, mzungu). These titles in part serve to establish the (white-western) author as an authoritative source of information on Kenya. 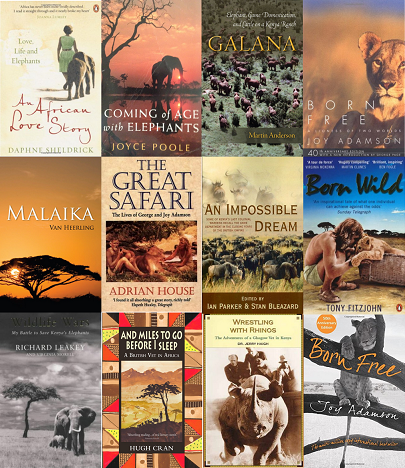 A sub-genre of non-fiction books about Kenya are those which deal with animals, safaris, conservation, and veterinary medicine; or (auto)biographies of people who worked in these fields. Born Free is the most famous example of these. Interestingly, although animals feature more frequently and more prominently on these covers (with good reason), the overall look is not that different to the non-fiction books about Kenya in the previous collage. Note the dominance of orange and yellow tones, and more sunsets, and yet more tree silhouettes.On these book covers, white people are depicted communing with animals as their equals, in ways that remind me of Binyavanga Wainaina’s observations in ‘How to Write About Africa’ (which is always relevant, afaiac): “Animals … must be treated as well-rounded, complex characters. They speak … and have names, ambitions and desires. … conservationists are Africa’s most important people…” (2005: 94).
3. 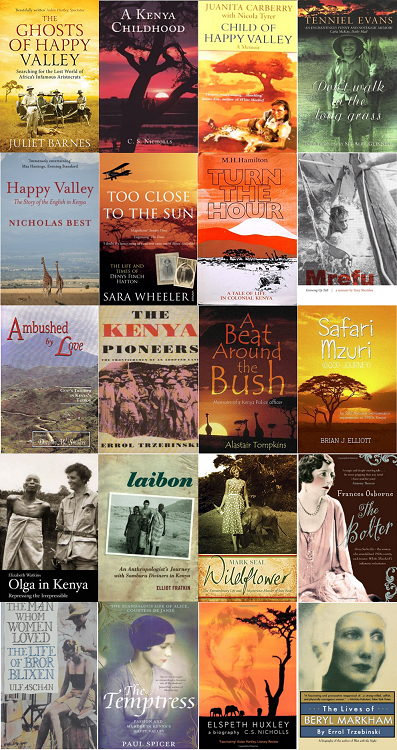 A further interesting sub-set of non-fiction books about Kenya are the colonial biographies and memoirs.** While faded portraits and black and white photographs have largely replaced the sunny photos of animals (but the two are combined on the cover of the Elspeth Huxley biography), on the whole little has changed.

In this sub-category, book cover designs depart from the orange-sky-and-acacia-tree template to the extent that they recall the glamour and romance of the 1920s & 30s in the faded photographs they use. These photos are suffused with what Particia Lorcin identifies as imperial and colonial nostalgia.In colonial contexts, nostalgia transcended/transcends individual loss and longing to incorporate a more collective sense of “resistance of tradition to modernity” (Lorcin 2012: 9). Imperial nostalgia allows the British Empire to be remembered as a glorious period, while conveniently forgetting the violence that produced and sustained it — while colonial nostalgia mourns and longs for a “vanishing Africa”, an “epic pioneering past”, or a gone-but-not-forgotten Britain (Lorcin 2012: 125, 159, 161).

These senses of nostalgia, located by Lorcin in fictional and non-fictional writing in a range of genres, are palpable in the images on the covers of these colonial biographies and memoirs. But such nostalgia is also traceable on the covers of the other books pictured, despite the books’ focus on more recent times, particularly in the empty landscapes, a romantic vision of an Africa that might soon be (has been?) effaced by modernity.

ENDNOTES
* Noting that, of course, the idea of ‘traditional’ is highly contested and somewhat unhelpful – I use the word here to denote what I perceive to be the designers’/publishers’ idea of African peoples’ non-European/non-Western attire and self-presentation.
** Laibon is perhaps a more rigorous academic piece of work than the other books here, but it is included since the point is not to judge the book by its cover (ha).
REFERENCES

Binyavanga Wainaina (2005). ‘How to write about Africa.’ Granta: The Magazine of New Writing 92: The View from Africa, 92-95.
Eleanor Higgs: I am a feminist and an aspiring academic in London, UK. This is my (infrequently updated) blog, featuring posts related to my Ph.D. research. Topics I am interested in include: the women’s movement in Kenya, especially the YWCA; histories of colonisation and missionary movements in East Africa; African Christianities and theologies; and women’s sexual and reproductive health and rights, particularly in relation to Christian ethics.