Skip to content
Cross-posted from: Not the news in brief
Originally published: 19.09.16

I’m beginning to think that men shouldn’t be allowed to have an opinion on the sex trade, let alone be in charge of deciding the legislation around it. In the last few weeks we have found out that Keith Vaz is a punter, that the Lib Dems are happy with the idea of prostitution being on the careers curriculum at school, and that Jeremy Corbyn just doesn’t care that much: 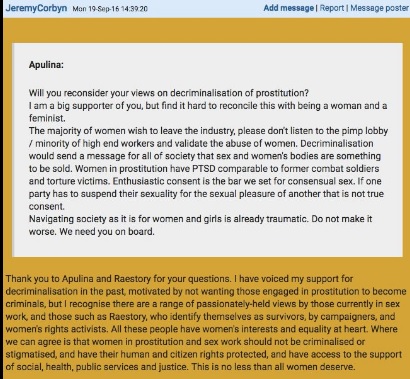 On top of that, any of us foolhardy enough to air our opinions about prostitution on social media can expect without fail an onslaught from mansplainers such as this one: 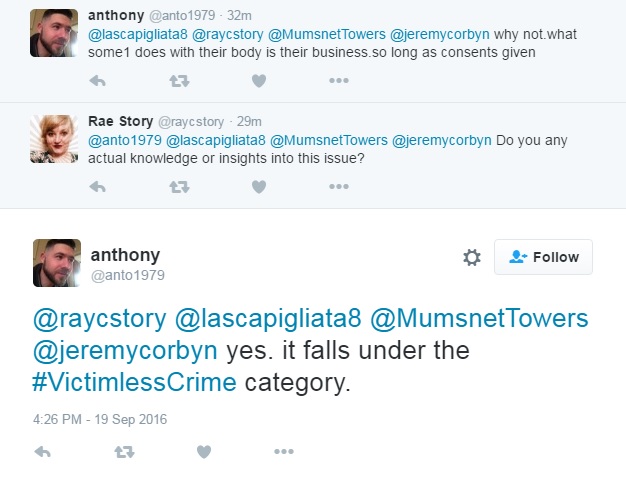 This man is talking to a prostitution survivor by the way.

So why do men have such difficulty understanding women on this subject?

Well, heterosexual sex is obviously different for men and women, partly due to physiology and partly due to social factors. Regarding the physiology of our sexual differences, the act of penetration for a man is not as intimate an experience as a woman’s experience of being penetrated; men usually orgasm from penetrative sex whereas the majority of women don’t. The way that women and men masturbate tells a story: men mimic the action of penetrative sex, women do something entirely different, involving the clitoris. Women can’t rely on sex with a man being any good, unless there is a certain amount of understanding from the man; men can usually come anyway.

Regarding social differences, women get all the bad sex words: slut, whore, hussy, slag, cock teaser, frigid bitch, prude, whereas men just get stud or player or the rather approving euphemisms Cassanova or Ladies Man. Men may get called impotent or worry about sexual performance, but they are not judged on the number of sexual partners they have in the same way that women are. Women get nearly all of the objectification and focus on body size and shape, whereas men don’t usually get this forensic examination of their ‘attributes’, and do not become public property for sexual appraisal as soon as they hit puberty. They therefore tend to have fewer body issues than women do.

Rape is a thing. Men commit 98% of sex crimes and around 96% of violent crime, and they tend to be generally bigger and stronger than women.

The cultural forces that shape men’s attitudes to sex are completely different to those that shape women’s. It’s not that women innately dislike sex, anymore than men do, but that the potential damage that heterosexual sex can do to women, both physically and mentally, is serious. A lot of men don’t get this: sex is good, therefore even if it’s coerced or forced or with someone you don’t fancy much, well, hey, it’s still sex – just not the *best* sex. Many men have a sneaking envy of women working in the sex trade: having sex all day for a living is a male fantasy: if you get to be a male porn star it’s an envy-inducing status to your mates. I believe that many men really don’t see that working in the sex trade can be such a bad thing for women. They think we’re making it up.

But if sex goes wrong for women, it’s not just disappointing – it can be painful, damaging and soul-destroying. Or even life-threatening.

Men create and consume a sexual culture antithetical to women but which they see as normal, and pretty pleasurable. Under these circumstances it is very difficult for them to see that it might not be the same for a woman: it can take a huge leap of imaginative empathy, and not all men are capable of that. If men are to make the laws which predominantly affect women, they need to have an understanding of exactly why the law needs making, and unfortunately when it comes to sex many men still think with their dicks.

Of course it wouldn’t be possible to ban men completely from the discussion, but you’d think that if the laws around being a punter are up for debate, the very least you should expect is that it won’t be a punter who’s making them.

The campaign group Nordic Model Now! has a template letter if you’d like to write to your MP:

Support our Demands! Write to your MP

Not the News in Briefs : I started this blog to write about the No More Page 3 Campaign and media sexism. As it’s gone on, it’s expanded in subject matter to become a blog about feminist issues in general. @helensaxby11