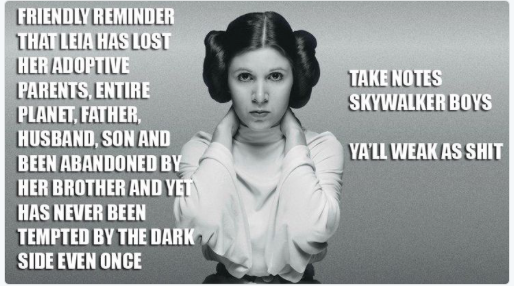 My time with Carrie Fisher, a hurricane of energy, charisma and foul language by Merope Mills

About a year ago I approached Carrie Fisher to write a column for the Guardian. With other A-listers, it’s all too common to be rebuffed by several layers of management, publicists and protective naysayers. But somehow – all too easily – I found myself with an invitation to her house in Beverly Hills.

And what a house it is. Huge neon arrows and signs hang from trees in the driveway. It wasn’t Christmas, but a fully lit tree was the centrepiece of her living room (it was there year-round). A giant moose head with a fez hung above the fireplace; snow globes depicting macabre murder scenes decorated the shelves and, outside in the garden, next to a life-size Leia stepping out of a British telephone box, was the back end of a lion attached to the wall, its raised tail revealing giant cat balls. …

Carrie Fisher: an iconic princess who became a powerful queen  by Daisy Buchanan

It’s weird that one of the most iconic images of Carrie Fisher is a depiction of her Star Wars character, Leia Organa, being held as a slave. Everyone is familiar with Leia, furious, trapped scared and sexy in a gold bikini – it’s harder to picture her killing her captor, Jabba the Hutt, immediately afterwards. We refer to Fisher’s character Princess Leia, not General Leia or Agent Leia, although all of these titles apply. It’s reductive, it’s infuriating, but perhaps it’s not wholly bad. As little girls, we’re primed to search for princesses. By the time many of us first encounter Star Wars, we’ve already swallowed the message that there’s only ever one girl in the movie. We learn to look for these icons of femininity and use them to work out who we’re going to be. Yet Fisher’s Leia was a feminist Trojan horse. When I first became aware of Star Wars, I wanted to be a girl in a gold bikini. Now, thanks to Fisher, I want to be a badass. That’s her legacy. …

General Organa doesn’t have the same glamor she did when she went by the name Princess Leia. She’s not young anymore, and she’s traded in her snowy white robes for a more serviceable outfit in drab earth tones. She doesn’t wear any insignia or other obvious indication of her rank. She’s given up her fancy updos for a more matronly hairstyle. She could be any other middle-aged woman, except for the way that she carries herself: with the swagger of someone who has grown accustomed to being in command.

This Leia is not the smart-alecky ingenue of A New Hope. She’s the brilliant strategist who has to make a split-second decision after learning that their star system is the Starkiller base’s next target. She’s the compassionate leader who is willing to break up a meeting with high-ranking resistance officers in order to thank and comfort Finn. She’s the woman who senses that Han Solo—the only man that she has ever loved—has been killed, and after taking a moment to register that she swallows her grief and returns to her work.

She has done this over and over: swallowed her grief, returned to the work. At this point she has eaten decades of grief. This is a Leia who has lost almost every important person in her life: Her biological mother died shortly after her birth. Her biological father was a literal monster who barely knew she existed. Her home planet was destroyed when she was just a teenager, and her parents were killed in its destruction. Later, her son Ben was drawn to the dark side, and her brother Luke, who had been Ben’s teacher, was driven by his grief and guilt to an unknown planet at the edge of the universe. It was this same grief that presumably led her erstwhile husband, Han Solo, to reassume his role as a wise-cracking criminal. …

… The sobering and often hilarious interview – conducted to coincide with the HBO documentary of Fisher’s Wishful Drinking – lasts for over 40 minutes and sees the duo perform a touching medley. …

“There’s a line in Postcards from the Edge where Meryl Streep says to my mother, ‘We’re designed more for public than for private,'” Fisher told Vanity Fair in 2009 after the release of her memoir Wishful Drinking, which she also adapted into a one-woman show on Broadway. “I’ve finally turned into my mother.”

And just last month, in an interview with NPR’s Fresh Air, Fisher called her mother “an immensely powerful woman.”

“There’s very few women from her generation who worked like that, who just kept a career going all her life, and raised children, and had horrible relationships, and lost all her money, and got it back again.”