Skip to content
Cross-posted from: Elizabeth the Third
Originally published: 19.11.15

Every time I have read about spirituality, and usually when I am reading anything vaguely self-help-y, and sometimes when I am trawling through the Internet, there is a message that keeps coming back. That we are one. All of life, all of the Universe is, or is part of, the same organism, essence, energy.

I’m not too interested in debating or justifying this though I’ll happily discuss it, and often do, when someone is willing to engage with the idea. But without any religion, I have always believed that somehow we are all connected. I don’t know why, and I can’t really explain it. I don’t need to.

I’m not sure I can describe my experience of ‘oneness’, other than to say that at times I feel a connection, an emotional mirroring, and a rush and pull so visceral that it’s frightening, as though the soul I haven’t yet decided whether or not I have is being clamped and dragged from my body. I often shut that feeling down, especially since this happens most often when I am faced with the pain of others. Pain I’d rather not feel with no power to act on it, that’s not mine to fully grasp anyway, that’s distorted and egged on by my imagination and my adrenal glands. END_OF_DOCUMENT_TOKEN_TO_BE_REPLACED 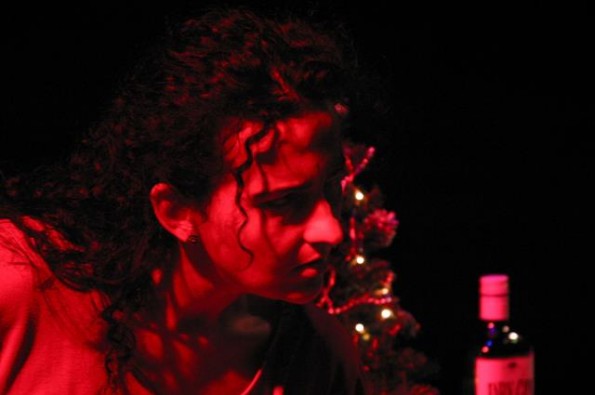 Lady in Red has been hailed by audiences across the UK as the best play about domestic abuse ever written. I saw it at the Nottingham Playhouse in 2013 and I thought it was incredible.

So, when I was asked to review the book of the stage play, I was intrigued to see if it would have the same powerful impact.

‘In the darkness a small, grey table is warmed by a blue light. On it, a miniature Christmas tree with baubles and the lights turned on, a small, brightly-wrapped gift, a glass and a bottle of gin. Either side of the table sits two grey chairs, one toppled over and in the background Chris De Burgh’s song ‘Lady in Red’ begins to play.

‘Gradually, the lights rise on Rose, a woman in a red dress facing away but swaying in time to the music. In her hand, she holds a glass of gin, her other hand gently caressing the side of her body.

‘As she turns, her face is bruised with a red cut across her throat.’

And so it begins – the journey of Rose, the ‘Lady in Red’; her inner turmoil following another incident of domestic abuse at her home.

I remember watching this play by Claire Moore and John Woudberg of Certain Curtain Theatre Company late last summer. I had never seen it before but knew it was an award-winning drama exploring one woman’s struggle to break the ‘chains of love’. I didn’t appreciate just how emotive it would be. The hairs on my body stood on end from the moment the lights in the theatre dropped.

Reading the original stage-play has had the exact same effect, I was gripped from the moment I read the opening paragraph depicting the scene outlined above.

It’s Christmas Eve and Rose awakes to find she has no memory of who or where she is. As she gradually weaves the threads of her memory together, a dark and violent pictures begins to emerge. Compelled to leave for fear of her life, Rose begins to pack, but it’s dark outside and the house is full of strange noises. Will she escape before her attacker returns? Or is he still in the house?

The stage play throws you straight into Rose’s head, a mother and the victim of ongoing domestic abuse. Her narrative is the only dialogue contained within this play which has an extraordinary impact on the audience as you find yourself quickly drawn into the unfolding drama, uncertainty and entrapment that Rose experiences. The play showcases the inner battle a victim endures in their quest to leave their abuser and it highlights just how difficult the decision to leave is.

I cannot fault the play for the insightful and thought provoking way in which it educates the audience about the power and control mechanisms used by the abuser to destroy the victim. It uses symbolism and rhyme in an effortless way to dramatically define the intricacies of domestic abuse victim’s life.

‘Red on my dress, red on the floor, red on the walls…and red on the door, red in my hair, red on his coat…red on the knife he held at my throat!…Was that his ‘special knock’? Is that the sound of his key in the lock?’

Rose voices her terror through prose so real and clear the audience experiences her anxieties, her loss at where to turn, her inner battle with love and fear.

And what is so clever is that this is done through one voice. The voice of the victim. And that is what is truly compelling about this stage-play. Finally, the victim’s voice is heard. And what a powerful voice it is.

If I have to be at all picky, my only gripe with the stage-play in its written format is the editing. There’s a few typos, a few grammatical errors which detract from the reading, but the story and the message contained within are so powerful it’s not hard to instantly ignore these.

I loved the play, although given the theme of Lady in Red, ‘loved’ feels like the wrong word, but love it I did.

I loved how it had me gripped to my seat, how the audience was silenced, I loved how the after-show discussion got people talking about the victim, about her life and her decisions and I loved how it so obviously made people think about things from the victim’s perspective. The questions from the after-show discussion are included at the end of the alongside information on recognising abuse and with lots of sources of support – a truly valuable addition.

‘Why don’t they just leave?’

If you’ve not read the original stage play or seen the production I urge you to. If you are an organisation working with victims and perpetrators of domestic abuse then this is a must-have tool for discussion and education. And if you’re one of those people who asks: ‘why don’t they just leave?’, well, Lady in Red answers your question to the point where you will never allow yourself to ask it again.

Lady in Red is published by Tallheart Publishing and has a foreword by Professor Liz Kelly.