Skip to content
Cross-posted from: Murder of the Goths

I’ve written before about how important the term “plus size” is, and why dropping it isn’t actually helpful. In fact I last wrote about it March 2015, it was one of the first posts I wrote on a plus size activism theme, and it was specifically about the #DropThePlus campaign by Ajay Rochester and plus size model Stefania Ferrario. I didn’t just write about it once either, I revisited it again to talk about the Diet Industry, and again to talk about it in relation to eating disorders, and again to refute some bizarre ideas being thrown around about those of us who want to keep the plus.

Obviously you are more than welcome to read back through all of those, but as this conversation keeps coming back up I wanted to try and draw together some of the biggest issues as I see them in to one post.

Let’s start with who is saying it.

I have noticed there is a consistency to who wants to lose the label of “plus size”. Ashley Graham wants to “drop the plus” Stefania Ferrario wants to “drop the plus”

What do these two models have in common? Well, they are plus size models, sure, but would the average person on the street call them “plus size”? I wouldn’t have thought so. Do you think their size means they are unable to shop in a majority of main ranges of high street stores? Do you think they are forced to use the “plus size” or “curve” section of stores? Or even find that their size isn’t catered to at all? Because I would be very very surprised.

So just how much does their experience of “plus size” relate to the experience of the average plus size woman? Very little I’d imagine.

And yet somehow they get to speak for us.

These women who have the luxury of not having to buy “plus size”, who can choose not to identify as “plus size”, don’t want to be called plus size. OK. So don’t. Solved that for you.

Oh but it’s not that simple see. Because you see, “plus size” earns them money. Despite the fact that them modelling plus size clothes is of no value to us, and is in fact deeply frustrating, they get to earn a living off of an industry that relies on our wallets. If they were so opposed to plus size as a term then surely they’d refuse “plus size” work? No? Or do their principles just not stretch that far? It’s almost as though the real issue is that they just don’t want to be associated with us fat women.

Yes, they’ll cry that they are doing it for the good of others, it’s about more than just them. It’s for young girls, for the eating disorder sufferers, the yo yo dieters, etc. What big hearts they have.

A young woman looking at a photo of a perfectly healthy woman with the caption “plus size model” below it, is in danger of believing that her own body is bigger than it should be and not normal.
– droptheplus.org

So much to unpick in that statement.

First of all, it shows quite clearly their own biases and fatphobia. They are promoting the idea that “plus size” is a Bad Thing™, just look at the words used.

They aren’t plus size, they are “perfectly healthy”. Because, as we all know, it is entirely possible to diagnose someone’s health based only on a picture, and weight is the only indicator of an unhealthy body. Plus size must mean unhealthy right?

I also like their use of “normal” as a contrast to “plus size”, there is evidently nothing normal about being plus size. Not in their minds at least.

This is also where their devotion to the improvement of the lives of young girls falls down.

They care about young girls like them, girls of a similar size. They are heartbroken at the thought of these slim, normal girls thinking they might be fat. But what about the fat girls? The girls who can’t opt out of being called “plus size”?

They are happy to accept money to model plus size clothing, denying those girls a chance to see their own body type represented. If all the models who are able to opt out of being called “plus size” refused those modelling jobs, maybe companies would be forced to hire actual plus size models, can you imagine the positive influence this would have on so many young girls? Seeing women with bellies and wobbly bits in their media! It would be incredible, and it’d help non plus size girls too, because they would see that they didn’t need to desperately pursue thinness in order to have worth.

This is where the power of “plus size” lies, it’s a rallying cry, it’s a movement. It’s thanks to “plus size” that there has been a concerted push towards seeing more body types in the media. Aside from the obvious practical problems with this term.. 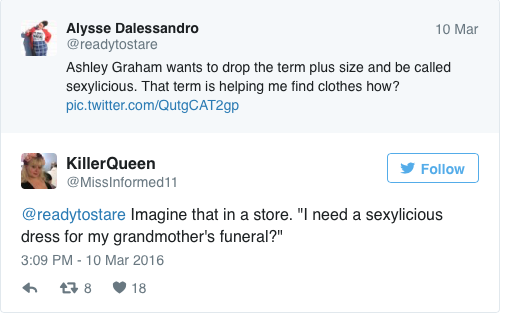 It’s also not fixing the problem they think it is.

So what is the problem with “plus size”?

“Plus” implies bigger than “normal”.  [..] Mixed with all the other body image pressures facing women, the implication that most women are “plus sized”, not “normal” is very dangerous to women and society.
– DropThePlus.org

Here we go again, setting plus size up against “normal”. So the problem is that “plus size” suggests someone is “not normal” and is instead a Bad Thing™?

So getting rid of “plus size” and replacing it with a different term will totally change it from being a Bad Thing™ then? Right? Because, of course, it’s just the word that causes it to be seen as a Bad Thing™ and not the actual act of being bigger? If we all start calling ourselves Curvy Sexylicious suddenly all fat stigma will just vanish in a puff of smoke right?? Like it did when people started using terms like “Curvy” and “Cuddly” and “BBW”? Those terms are now never said with scorn right? And they’ve totally stopped women being judged for their dress size haven’t they?

Wow, it’s almost like the cause of the problem goes deeper than just a simple two word term.

We need to tackle the cause, not the symptom. Yes, right now, “plus size” carries stigma, getting rid of it and replacing it with a different word just moves that stigma. Don’t know about you, but I’d rather fight to do away with it entirely. It’s not a quick solution, but it’s worth the time and effort. (Unless of course you are not actually interested in helping, and just don’t want anyone to lump you in with the fatties)

Of course some people think we can drop the plus, and then not have a replacement term, as they point out we have a numbers system that works just fine.

Expect when it doesn’t.

But of course, not having to rely on plus size ranges, they wouldn’t actually have any experience of that.

If you are shopping for clothes as a plus size woman it is very useful to know which clothes are designed with plus sizes in mind.

I’m a size 18-20, so I’m quite lucky in that my size is catered to by some straight size ranges. However, because of my height my body shape is very unlike plus size models who are also a size 18-20. My body shape has much more in common with my larger sisters. I know from experience that a size 18 in a straight size range, and a size 18 in a plus size range are very different beasts. While the straight size range is theoretically going to fit me, it often doesn’t. It’s not actually designed with a plus size body shape in mind. Bodies do not put on fat in a uniform manner as you gain weight. So just grading a size 10 dress up to an 18 without making enough allowances for different fat distribution is going to result in a uncomfortable fit.

When I realised that plus size ranges were designed with women like me in mind it was a revelation, up until that point I thought there was something wrong with my body because I thought the larger sizes in a straight size range should have fit me, and when they didn’t it made me feel like a unnatural freak.

So while plus size models might be absolutely fine just using the numbers system and just relying on the label saying “18”, they don’t have to worry about being the wrong type of “18”. I want to be able to see that the size “18” in my hands is cut for someone like me, before going through the upsetting process of trying it on.

Take away the term “plus size” and how do I know which are for women like me?

Take away the term “plus size” and you make me feel other and like an outsider. And it’s not just me, it’s all those women that drop the plus campaigners claim to be helping.

The solution, as I see it, isn’t to drop the plus. In fact this is what needs doing..

Oh and drop the reluctant plus size models, I want to be sold clothes by women who aren’t ashamed to be associated with me, thanks.

Murder of the Goths: A personal blog covering all sorts of topics that affect my life. Whether it’s parenting, disability, geeky stuff, feminism, paganism or (of course) goth subjects. Twitter: @MurderofGoths