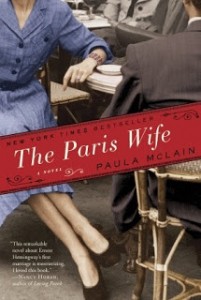 Cross-posted with permission from My Elegant Gathering of White Snows

This month I received one of the free copies of Paula McLain’s The Paris Wife via the Mumsnet Book of the Month Book Club. I’ve enjoyed most of the books I’ve received free copies of with the notable exception of Aimee Bender’s The Particular Sadness of Lemon Cakewhich bored me senseless and I gave it up after 50 pages. The Paris Wife, though, made me rage incandescently.

It started with the comment on the front from Sarah Blake who wrote The Postmistress : “As much about life and how we try to catch it as it is about love even as it vanishes …”. My first instinct was to bang my head off my desk. This is a book about Ernest Hemingway’s first marriage; the Ernest Hemingway who isn’t precisely renown for his respect for women. I’ve not read Sarah Blake’s The Postmistress so I don’t know if this book represents her understanding of love but it sure as hell doesn’t meet mine.

The back cover is worse. It bears the quote “Deeply Romantic” from the Times Literary Supplement which is a publication I generally avoid because of, well, Rupert Murdoch. The less said about that man, the better. But, back to the point: “Deeply Romantic.” This is the story of an psychologically abusive man who belittles and isolates his wife Hadley at every opportunity whilst they live in Paris and then, in a grand gesture of romance, tries to get her to live in menage-a-trois with his mistress; one of Hadley’s only “friends.”

There is nothing ‘romantic’ about this relationship. Hadley is a lonely and isolated young woman who enters into a relationship with the first man she really manages to meet whilst living in a fairly suffocating family situation with a dying mother. Hadley may be several years older than Ernest but this isn’t a relationship of equals. She gives up everything for him and he tries to destroy her.Ernest used Hadley because he could but he had an escape route and she didn’t. This isn’t romance. It’s psychological abuse and it is utterly misogynistic to pretend otherwise.

Ernest had sex with another woman in the same bed as Hadley. It doesn’t matter that this other woman becomes his second wife Pauline or that she instigated the encounter. The point is this is a self-destructive man destroying the women around him and burning through friendship after friendship with his narcissism.

This isn’t romantic behaviour. It’s soul-destroying.Whilst this is a fictional account and we can not know what happened during Hadley and Ernest’s marriage for certain, it is utterly irresponsible to peddle this kind of victim-blaming misogyny as “romance.” If this were advertised simply as a fictional/biographical account of their marriage, then it would be an incredible book because it is beautifully written and McLain has some lovely descriptions of the loneliness within marriage and the feelings of isolation from everything but it’s peddled as a “romance”.

This trope is dangerous because it reinforces a cultural trope about “artistic” men which blames their victims for not being “understanding.” Roman Polanski has benefited quite well from this trope which has allowed him to take no responsibility for his very serious crime of child rape. And, get a standing ovation for his Oscar which was, frankly, one of the most appalling scenes of mass victim-blaming ever.

If Hadley were my friend, I would be phoning Women’s Aid on her behalf. The trope of abuse as romance is destructive and violent. It starts when we tell little girls that the boy in their class who pulls their hair and calls them smelly “loves” them. We teach our daughters that men don’t know how to communicate love effectively so have to resort to crass bullying and violence.

Good men don’t need to have their egos stroked daily nor do they get upset if you have friends.

Good men don’t treat their wives as appendages to be discarded when they get “old” or have the temerity to give birth and change the shape of their body.

Don’t get me wrong. I did enjoy this book. It is beautifully written and McLean’s descriptions of their marriage are equally sad and moving but this isn’t romance. It isn’t love.

It also isn’t actually about Hadley; mostly Hadley serves as a tool for defining Ernest. Depressingly, the book is really all about him. Hadley is just there, in the background, serving no purpose except as “sweet little wife” to big, important author. It would have been more interesting if it had been about Hadley. We spend far too much time celebrating “Great Men” and not enough time simply acknowledging women. The thing which would improve this book is to have advertised it as ” The Real Woman’s Guide to Spotting an Emotionally Abusive Fuckwit,” then Hadley wouldn’t be insignificant in her own story.

As long as we keep peddling these relationships as “romantic,” we will continue to institutionalise Intimate Partner Violence as normal. The Paris Wife might be representative of Hadley and Ernest’s marriage but it most certainly should NOT be representative of marriage. It’s the same crap that Gabriel Garcia Marquez tries to pass off as romance in Love in the Time of Cholera in which a selfish narcissist has a tantrum because the woman he “loves” marries another man. His response to this offence is to sexually violate a number of women including a teenage girl for whom he was a legal guardian. That is child rape. Not romance.

I call this The Norman Mailer Rule. If you meet a man who says Mailer or Marquez are romantic, don’t date them. Life is too short and love too precious to waste on these relationships.

These are the signs of Intimate Partner Violence as outlined by Women’s Aid:

• Pressure tactics: sulking, threatening to withhold money, disconnect the telephone, take the car away, commit suicide, take the children away, report you to welfare agencies unless you comply with his demands regarding bringing up the children, lying to your friends and family about you, telling you that you have no choice in any decisions.

• Disrespect: persistently putting you down in front of other people, not listening or responding when you talk, interrupting your telephone calls, taking money from your purse without asking, refusing to help with childcare or housework.

• Breaking trust: lying to you, withholding information from you, being jealous, having other relationships, breaking promises and shared agreements.

• Isolation: monitoring or blocking your telephone calls, telling you where you can and cannot go, preventing you from seeing friends and relatives.

• Harassment: following you, checking up on you, opening your mail, repeatedly checking to see who has telephoned you, embarrassing you in public.

• Threats: making angry gestures, using physical size to intimidate, shouting you down, destroying your possessions, breaking things, punching walls, wielding a knife or a gun, threatening to kill or harm you and the children.

• Sexual violence: using force, threats or intimidation to make you perform sexual acts, having sex with you when you don’t want to have sex, any degrading treatment based on your sexual orientation.

• Denial: saying the abuse doesn’t happen, saying you caused the abusive behaviour, being publicly gentle and patient, crying and begging for forgiveness, saying it will never happen again.

Feminism and Motherhood: On Choice, Criticism and Self-Confidence by @LynnCSchreiber