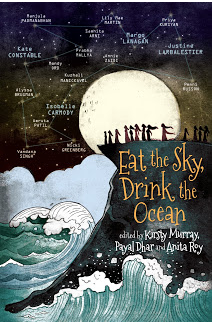 Review:  The first time I ever heard Annie Zaidi speak dates back to my post grad days when she has a special session with us filled with her page-3-kinda-like-ermygod stories. As expected, massive eye rolling happened. Fast forward 3 years later, I see her again, this time with Mandy Ord at JLF 2015. More eye-rolling and subtle scoffing, until she and Mandy spoke about alternate endings to iconic tales in our culture, such as the love saga of Salim and Anarkali. I was like a dog who picked up a new scent. That one story and the epic cliffhanger was sufficient enough to itch my mind and click ‘add to cart’ on Amazon.

What delightful book. I felt as if I had just won the English Elocution at school and was beaming in pride to take home my ‘Enid Blyton’ prize. That feeling resonated. The brilliant concept behind  this book is that it re-imagines so many various situations or classic tales that it’s can safely be handed to people of all age groups, starting say 12+ and on. The visuals in some of the stories are raw and no nonsense, while some of them are whimsically clever.
The beauty lies in the little snippets on how the Indian and Australian contributors collaborated. Some of them never even met, but the sense of sisterhood was strong enough to keep them bound to this project. Matters that plague the two entirely different cultures were glued together by this vision for a female-friendly world and I applaud the start. It is not as hard for women to connect as people assume. In most cases, what we have endured, what we see, feel, do and receive remains the same universally and we are ever ready to aid our fellow sisters.

The mix of short stories, classic folk tales, dystopian fantasies, graphic stories make it such a collector’s delight. Brag points for the bookshelf. We know ‘Zubaan’ is the house of feminist themed publishing, nonetheless, the backdrop of feminism was so subtle that it made me want to jump into the book and live in that world. No cliched words are casually thrown around, the concept goes beyond wishful thinking to make it a seeming reality – a very refreshing change.

One point. And the only point that troubles me is that most of the stories are established centuries after modern times, as though to imply that this idea that they have set up will materialise only after practically everything on earth has stormed revolution after revolution, mass destruction etc. This could be just me but the feeling of a dystopian society was strong and that did make me think.

Regardless, it did leave me happy which my readers would know is quite rare. The attempt is fantastic.

Do pick it up. It may not be the most literary read, but it sure is enjoyable.

Obscure and Unnecessary Drama: Mehreen Shaikh, an Indian writer born and raised in Oman. Although I do visit my country of origin annually, I did spend a few years there studying. Not just academics but our society. Narrowing down further, I observed the relationship it had with women. I was brimming with observations and outrage. It took me a good while to tame my angst and harness it into proper valid arguments. Now I blog, where I feel free to rant about issues that I notice that most people would dismiss as minor but I know how the woman in that instance would feel. So many thoughts and so many incidents take place in a woman’s world that by no means are simple or easy to resolve.