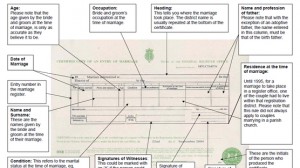 Mothers’ names & occupations should be recorded on marriage certificates alongside Fathers’

Women are routinely silenced and written out of history. The UK has been a signatory to the Convention on the Elimination of All Forms of Discrimination against women for many years.

By accepting the Convention countries committed themselves to undertake a series of measures to end discrimination against women in all forms, including:

to incorporate the principle of equality of men and women in their legal system, abolish all discriminatory laws and adopt appropriate ones prohibiting discrimination against women

It is not acceptable for the Home Office to say that:

“the requirement to include the father’s details in a marriage certificate is historic and would require a change to the present legislation. Currently there are no plans to change the rules.”

The Equality Act 2010 bans unfair treatment and helps achieve equal opportunities in the workplace and in wider society.

This seemingly small inequality is part of a much wider pattern of inequality.  For me this campaign is about more than just this single issue. It is indicative of a society and culture and a country where things are decided by men to suit men.

Marriage was historically a business transaction between the father of the bride and the father of the groom.  It is important that all forms of discrimination are challenged.  Language shapes behaviour and cultural sexism is a huge barrier to true equality.

I am so grateful to the many people have taken the time to sign the petition I set up on change.org [http://www.change.org/en-GB/petitions/mothers-names-should-be-on-marriage-certificates] and to those who have explained why this issue matter to them.

Genealogists are very keen for this to change to make researching family trees easier.

Many people have said that they have been brought up by their mother and that their father has been entirely absent – these people are upset that the only person who parented them cannot be included on a marriage certificate. Many women are bringing up children with no support or contact from the father – these people would like their role in their childrens lives to be recognised.

“My son’s father chose not to be involved in his life. I’m bringing him up alone. Why should someone who’s had no input into my son’s upbringing and takes absolutely no responsibility or him whatsoever get to be on his future marriage certificate, when I cannot? There must be hundreds of thousands of families in this situation. This is a completely outdated example of historical patriarchy. It needs changing.”

Some are feminists and people who want this for basic equality reasons.  “Because I am a feminist”.

Others point out that “It is just common sense and long overlooked correction that has to be made.”

One I find the most poignant is “To be named is to exist, to be recognised.”

If you are in Scotland or Northern Ireland then you may be confused by this because marriage certificates there have included information about mothers for many years.

I have not been able to find definitive information yet about what the position for civil partnerships in England & Wales is, nor what plans there are for the format of marriage certificates planned for same sex partners.