So when the Irish Times featured the case as part of their series of stories from their archives, quite a few Irish friends sent me the link and asked me what I thought. Now I’ll say again that this is a case that is very special to me so I’m apt to be a touch judgemental but in this case the article in question raised my hackles both as a historical scholar and as a court reporter.

It doesn’t help that one of my particular interests in this case is the newspaper coverage. I gave a paper on that subject at the Shared Histories conference at the National Library of Ireland this summer and indirectly it gave me the thesis for my doctorate. I’ve got hard drives full of PDFs of newspaper pages, not to mention filing cabinets full of photocopies gathered before digital newspaper archives were as big a thing as they are now. The Ireland’s Eye murder was one of the most notorious cases of it’s day, as big as any of the cases I’ve covered or written about as a journalist. There were a lot of column inches in a lot of newspapers and you can only get the full story if you look at them all.

So my first problem with the Irish Times article is that it only really looks at an Irish Times article from 1904, 52 years after the murder took place. Now, fair enough, the Irish Times wasn’t around to cover the Kirwan’s trial in December 1852 although they did cover Kirwan’s imprisonment from time to time over the years. The problem with their reporting though was, since they had no staff who had covered the case, knowledge of the finer points of it was sketchy and I’ve always discounted their 19th and early 20th century coverage as too removed from the actual case to be much use.

There are numerous factual errors in the piece in the Times, which I’m presuming is down to the 1904 coverage. According to the article the prosecution case was based on the supposition that Kirwan had used a needle like blade to commit the murder. There was certainly a lot of chatter about Kirwan’s supposed sword stick after Patrick Nangle, one of the boatmen, described Kirwan’s “tuck stick” but this was it’s first mention and a sword stick was never the basis of the prosecution case. According to the Crown’s expert Thomas Geoghegan, Professor of Medical Jurisprudence at the Royal College of Surgeons in Ireland, who advised the Crown case but did not give evidence during the trial, the most likely cause of death was suffocation. What the prosecution did suggest was that Kirwan had “burked” his wife, in other words smothered her by compressing her chest and covering her mouth and nose. According to the Freeman’s Journal coverage of the trial when Dr Hatchell, the police surgeon who had performed the post mortem examination was asked to give cause of death he said suffocation.

A more basic error is that Kirwan’s barrister, Isaac Butt, was not yet a politician. The trial took place the week of the British budget and there were press reports after Kirwan was convicted that Butt had taken the mail boat over to England to be back in Westminster in time for the debate. The Freeman’s Journal on December 13 mentions a motion Butt had been bringing forward being postponed.

In fact two months after Kirwan had been convicted Butt used the case as the basis for a bill on second trials in criminal cases which he raised in Westminster. Even though the bill was unsuccessful it gave the Kirwan case a place in legal history as one of the first steps on the road to second trials.

Lastly the piece cites a letter from a Mr Dennis, speaking on behalf of the trial jury in which they expressed relief at the sentence commutation. Actually that’s not quite what the letter says. Dennis is writing to back up the verdict he and his fellow jury members came to in the face of increasing public scrutiny.

He was writing within days of the news that Kirwan’s sentence had been commuted to transportation for life and mentions in passing that the saving of a life is something to be relieved about. Given that, in 1852 no-one was hung in Kilmainham Gaol where Kirwan was sent, and while it would be years before the death sentence was done away with, in the years after the Famine there was little appetite for execution and most sentences were commuted. Seasoned observers of the courts would have known this and expected the news to arrive. This would have been why the Dublin papers were so slow to print the wild theorising and speculation that appeared in the British press.

There are other minor inaccuracies but these are the ones that really stick out. This is a moment in history not a story. The facts are sacred and deserve to got right.

My second problem with the piece is that it plays into a stereotype that has dogged this case since it happened. It’s a reaction you’ll still see about modern cases. When the accused is a “respectable” man from an affluent background, there will always be a proportion of the reaction that refuses to accept any evidence because he was “our sort”. You can see this reaction most clearly in the Kirwan case. Within days of the verdict, long before the Irish press started commenting, the letters pages of the London Times and the London Evening Standard were full of middle class men expressing their disbelief that one of them could have committed such a heinous act. Because of the outcry from middle class, professional men who identified with the Dublin artist the case became something of a scandal. The great and good connected with the case in Dublin had to justify their actions, some, like the Deputy Governor of Kilmainham Gaol lost their positions (although I’ll go into more detail about that another time.

But most pernicious in my opinion is the way Kirwan has entered history with his character surprisingly unblemished. This was an abusive husband and few who sat in that courtroom had any doubt of his guilt. I’ve seen far more evidence than I will go into here but the evidence was there during the trial. Female witnesses were not particularly thoroughly examined or cross examined but there is a nugget from washerwoman Ann Hanna on day 2 of the trial.

But after a high profile trial like this everyone likes to be an amateur criminologist and very often it’s the victim who gets forgotten in this process. You might assume that the concept of victim blaming is a modern idea but in January 1853 the London weekly paper The Examiner was most outspoken.

Many British papers, who had often only carried part of the trial coverage, were quick to shout about Kirwan’s innocence. The London Evening Standard were particularly rabid when it came to fighting his corner. The whole thing had been a papist plot they hinted. On January 4 1853 they commented on a letter sent by Crown Solicitor William Kemmis, who had written in to argue for the impartiality of the judges and the jury. The Standard claimed, incorrectly as it turned out, that Kirwan was tried by a predominantly Catholic jury and didn’t have a chance as a Protestant convert. 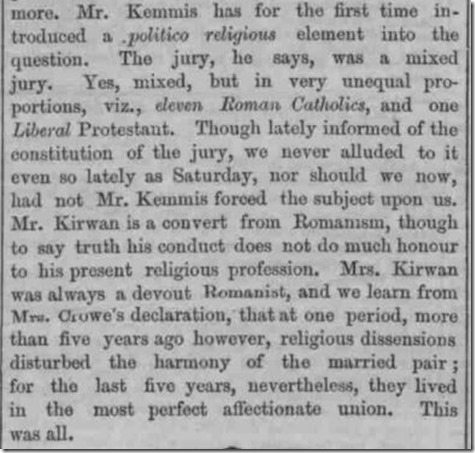 It didn’t seem to bother them that their jury analysis was wrong, a fact pointed out by Mr Dennis the jury foreman (in fact there were at least 4 protestants on the jury, one of whom knew Kirwan socially but still convicted). Together with the London Times they championed the Kirwan case as a great miscarriage of justice. At the same time more liberal papers like the Examiner and the Morning Post were more trusting of the evidence and the reporting of the Irish press. But as is so often the case, even now, it’s the loud entitled voices of the right who drown out the truth and all to often it’s a garbled version of the truth that gets passed down. It’s worth noting that the Dublin press, who had all sent staff to cover the trial, were pretty unanimous in believing in Kirwan’s guilt. The  Irish Times in 1904 obviously didn’t bother looking for accurate contemporary reports – a mistake repeated in 2016. I’ve been researching this case a long time and I’ve come up against this miscarriage of justice nonsense at every turn. But each time this lazy mistake is made it’s another disservice to the victim, Maria Louise Kirwan. I also wrote the Ireland’s Eye murder for the Irish Times a few years ago by the way – and made some of the points in this piece then. If you want to read in more detail about the trial I covered it here, here and here and there are other posts if you look under the tag. This is the case that changed the course of my life and I will keep writing about it as long as there is material and people keep getting it wrong!