Why does radical feminism get so much bad press? 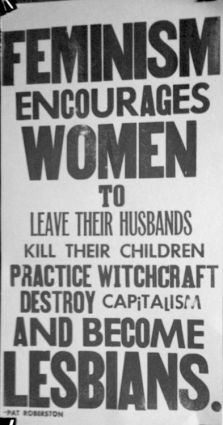 claim that the feminist agenda “…encourages women to leave their husbands, kill their children, practice witchcraft, destroy capitalism, and become lesbians” has set the tone for mainstream discussions of radical feminism. While Robertson’s perspective on radical feminism verges upon parody, his misogyny served with a side of blatant lesbophobia, it has also served to frame radical feminism as suspect.

If radical feminism can be written off as something sinister or dismissed as the butt of a joke, none of the difficult questions about the patriarchal structuring of society need to be answered – subsequently, power need not be redistributed, and members of the oppressor classes are saved from any challenging self-reflection. Rendering radical feminism monstrous is a highly effective way of shutting down meaningful political change, of maintaining the status quo. It is, therefore, predictable that the socially conservative right are opposed to radical feminism. …