When I say that I am the founder of a gender-neutral magazine for kids, and mention my objection to the ‘pinkification’of girls, there are generally two responses.

‘Oh, cool. I hate this obsession with pink for girls’.

‘What’s wrong with pink? My daughter likes princesses. Why should you tell me that it is wrong for my daughter to love pink?’

To clear up this misunderstanding, I would like to state publically –I don’t hate pink. I don’t think there is anything wrong with girls liking pink, or wanting to be a princess. When my daughter was younger, she was often clad in pink, from top to toe. She even had a [gasp] Disney Princess bedr
oom.

My 12 year old daughter isn’t a fan of pink anymore, but she has more nail polish than I have! It doesn’t stop her climbing trees, playing football or doing anything that she wants to do.

I don’t want to ban pink, or stop girls wearing pink. I am for MORE choice, not less. Right now the choice for girls is not, ‘Which colour of shoes do you want?’, but ‘Which shade of pink shoes do you want?’Why limit girls to pink and purple shades, when we have a whole rainbow of colours?

When we look at the range of toys available for boys and girls, and how to make them ‘gender neutral’, we often see a troubling thing happen –the disappearance of ‘girls’toys’. German blogger Charlott Schoenwetter makes this point in this excellent post Pretty In Pink (in German, but worth a read, even if you have to throw yourself on the mercy of Google Translate).

Charlott tells the story of a school book Mathestarts 4, which showed two children, a boy and a girl, buying toys. In the book released in 2005, Thomas buys a football goal and a Gameboy, while Tanja bought a doll and a toy horse. When the book was reissued at a later date, Thomas still bought a football goal, and swapped his Gameboy for a camera. Tanja now wanted a badminton set and a board game compendium. Thomas didn’t wish for a doll in this new edition; instead all ‘girl toys’ were removed completely.

What is the take-away from this kind of change? That boys’ toys have positive associations and girls’ toys are negative – or perhaps frivolous. We shouldn’t make girls feel bad about liking Barbie dolls, just as young women shouldn’t be made to feel they are betraying feminism by wearing lipstick or high heels.

The ‘pinkification’of girls is part of the trend to ueberfeminise women, and this is what I’d like to challenge. The pressure that young girls are under to be feminine, to be pretty. Girls are faced with ‘perfect’images that they can never live up to.

The singer Lorde tweeted this picture recently, pointing out the difference between two photos taken on the same day –one photoshopped to make her look immaculate, the other her natural skin, including imperfections.

i find this curious – two photos from today, one edited so my skin is perfect and one real. remember flaws are ok 🙂 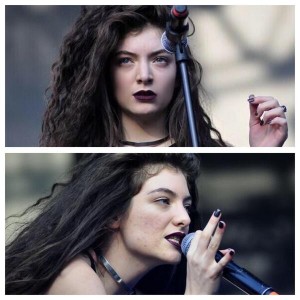 Girls look at pictures in magazines and compare themselves with the flawless celebrities shown there. The use of photoshop isn’t restricted to evening skin tone; entire bodies are altered, waists slimmed, necks lengthened, legs stretched. No wonder one in five 7-11 year olds have been on a diet (as research by Girlguiding revealed last year)

Boys don’t escape unscathed either. Not every boy wants to be an explorer or a scientist. Not every boy loves football, but if you were to look at products aimed at them, you would never know this. Where birthday cards for girls are a sea of pink and glitter, cards for boys are a raging river of testosterone and adventure.

How many boys have been told, ‘No, that is for girls’, when they started playing with a toy kitchen? And how do we expect boys to grow into men, who respect the rights of women, and work towards an equal society, when toy kitchens and household goods are in the Girls Department?

Kids mirror the behaviour they see at home, and they learn by playing. Giving them access to toys and games that present girls as their equal, means that boys will just assume that this is the way things are.

A recent study showed that girls whose fathers did their share of housework were more ambitious in their school and career choices, than girls who watched their mother do all the work.

Gender-neutral toys, games and product are good for boys and girls, because they don’t preinstall ideas into their head, about what men or women are good at, or should be doing. We shouldn’t throw the baby out with the bathwater, and ban pink toys. Lets give kids the choice of all the colours, not just the pink and purple ones.

Jump! Mag is an online magazine for kids, which aims to inspire, educate and entertain in a safe and girl-positive environment [@JumpMag]

One thought on “In Defence of Pink by @JumpMag”