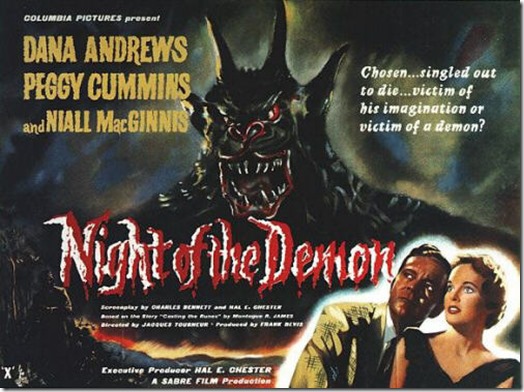 I thought it was time for another look at real cases that have their echoes in classic films. Last time I wrote about lost Lon Chaney film London After Midnight  and it’s connection to the rather tragic case of Julia Mangan, killed by the obviously disturbed Robert Williams. This time we’re sticking with a horror film but the story has more than a whiff of the supernatural – the link might be quite rather tenuous but I’m going with it. It’s a great film and the cases that echo through the story are fascinating ones.

Night of the Demon  was Jacques Tourneur’s version of the classic M.R. James short story Casting the Runes. Released in 1957 it tells the story of the sceptical psychologist played by Dana Andrews who comes up against the charismatically devilish Niall MacGinnis. It’s a tremendously creepy film that has all of James’ hallmarks – intellectual arrogance coming a cropper against older, darker forces – but for the contemporary audience it was a story that carried a particularly plausible shiver thanks to a couple of strange war time murders. Even though there’s no direct link, there’s a very good chance that screenwriters Charles Bennett and Hal. E. Chester were influenced by what they read about these cases when they were updating James’s earlier story.

In 1943 four small boys were poaching in Hagley Woods near the village of Stourbridge in Worcestershire. They came across a large Wych Elm near Wychbury Hill and it was there they made a shocking discovery. Looking for birds nests they climbed the trunk and peered into the hollow. Below them was a human skull still with traces of hair attached.

Local papers appealed for information about the identity of the deceased – a woman believed to be aged between 35 and 40. 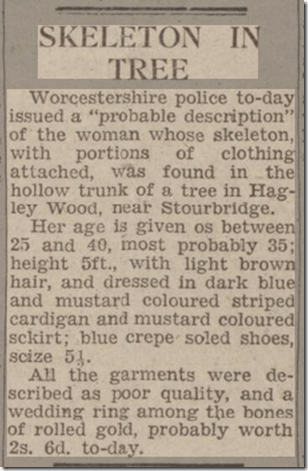 No one came forward to claim her. But someone didn’t want her to be forgotten. As the first anniversary of the discovery approached, the Sunday Mirror took up the story.

The piece explained that shortly before Christmas the previous year the words “Who put Luebella down the wych elm?” were written in chalk on the wall of a house on Hayden Hill Road, Old Hill. The following week the words appeared again on the wall of an empty premises in Upper Dean Street, Birmingham. A few days later, the mysterious writer was obviously getting frustrated that no one was answering them so the words “Hagley Wood Bella” appeared several times near by. Bella has never been formally identified. One theory said she was part of a war time spy ring. The file remains open.

The following year a gruesome murder in nearby Warwickshire dredged up old suspicions and paranoia. On Valentines’ Day, 74-year-old hedge cutter Charles Walton was slashed to death near the village of Lower Quinton with a pitchfork and a slash hook. Initial reports such as this one from the Gloucestershire Citizenthe following day made no mention of any supernatural link but that would soon change. 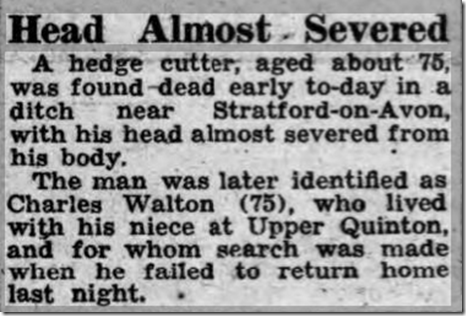 However the case soon became synonymous with witchcraft, largely thanks to the later accounts of the famous Chief Inspector Robert Fabian, who arrived from Scotland Yard to investigate. In his 1950 memoir, Fabian of the Yard, he would write.

“One of my most memorable murder cases was at the village of Lower Quinton, near the stone Druid circle of the Whispering Knights. There a man had been killed in a reproduction of a Druidical ceremony on St Valentines’ Eve”

Fabian suggested that the case had marked similarities with a murder that had happened nearby a generation ago, a murder where witchcraft actually had been a very real part of the story. It’s rather unlikely that the Walton case had anything to do with the occult even if it did make one hell of a good story. The earlier case on the other hand really did seem to arise from good old fashioned superstitious paranoia.

In December 1875, the the trial of James Haywood at the Warwickshire Assizes was covered by the Warwickshire Journal. All the witnesses described Haywood’s preoccupation with witches, leading to a brutal attack on elderly Ann Tennant, who he had attacked with a pitchfork and killed in the village of Long Compton.

Haywood had apparently said that there were 15 or 16 witches in the village and that they were making it impossible for him to work. He said that he would kill them one by one. When the victim’s daughter took the stand, he got agitated in court.

According to the superintendent of the county lunatic asylum Haywood was insane. 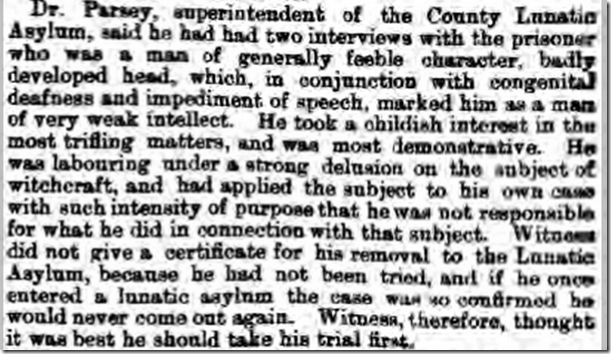 Haywood was found not guilty by reason of insanity and would spend the rest of his life in the asylum. However it is worth noting the words of an earlier witness, local farmer James Taylor…

It’s impossible to know how much influence these cases had on the writers of Night of the Demon but it is very reasonable to assume that they were were in the mix somewhere. Fabian’s memoires were adapted by the BBC in the 50s and  the Lower Quinton case in particular was a notorious one. The film is a quintessentially English horror firmly rooted in a world where belief in witchcraft had never fully died out. In fact, in the 50s it was rather a fashionable subject. The founder of modern witchcraft, Gerald Gardiner, had published his book Witchcraft Today in 1954 and Hammer Films were helping horror films back into the spotlight after the war. These three cases undoubtedly formed part of the national psyche and have not lost their resonance today.

All newspapers available on Findmypast.co.uk