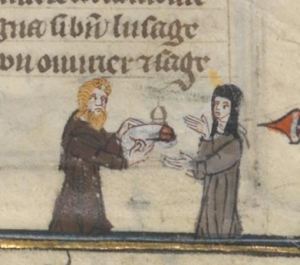 The above image – a sheepish-looking monk handing an unfeasibly large penis to a disconcerted nun – may look familiar to anyone who’s read my first post in this blog.

It’s one of a sequence of illuminations made in the margins of a manuscript by the medieval artist Jeanne de Montbaston. Jeanne worked with her husband, Richard, in Rue Neuve in fourteenth-century Paris. She did the illustrations for a fairly large number of manuscripts, including dozens of copies of the popular Romance of the Rose. This poem is an allegorical reflection on love, but it is also justifiably famous as one of the most misogynistic books around, the subject of medieval author Christine de Pizan’s brilliant attack on male writers who treat women only as sex objects.

A short passage can illustrate what Christine meant. In the poem, the allegorical figure of ‘Genius’ (who is male) argues that all men should take advantage of women as sexual objects, and he compares the (male) act of writing with the act of penetration, while picturing women as passive, blank like an unwritten page. In a vicious rant, he declares:

“those who do not write with their ‘tools’ … on those beautiful, precious tablets Nature has made for them … should suffer the loss of their penis and testicles.”

The word Genius uses for ‘tool’ literally means both ‘pen’ and ‘penis’ – the pun is in the original French. This rant is primarily homophobic – or more precisely, it’s an argument against sodomy, since medieval people didn’t have the same sense of sexual orientation, rather than sexual activities, that we do now. It’s also, obviously, the speech of someone who really doesn’t think a great deal of women, and who thinks the activity of writing and the fact of having a penis are intrinsically related (if you think this sounds familiar, you’ll be pleased to know that V. S. Naipaul and dear David Gilmour, of Dickhead Detox fame, feel the same way).

Now, the question is, why would a woman artist – and one who was obviously pretty good – spend her time working on a book that puts forward such an unpleasant view of women?

I’ve heard it suggested that Jeanne was probably illiterate and that – because of this – she didn’t really know what she was illuminating and so popped in a silly story about nuns and penis trees instead of choosing a more suitable image based on the story itself.

I have a bit of a problem with this, not least because shedloads of medieval illuminators go off-piste in their choices of subject-matter and no-one suggests they’re all illiterate (though some of them surely were). But, more to the point, I think Jeanne’s illumination has quite an amusing relationship to the text and its messages.

On one level, of course, it seems to confirm what Jean de Meun says about women in general: we’re all about the cock, even the nuns. And the little pictorial narrative from which the image above comes concludes – predictably – with the monk and nun sleeping together. Though, honestly, they don’t look much happier about it than they did in the first picture! 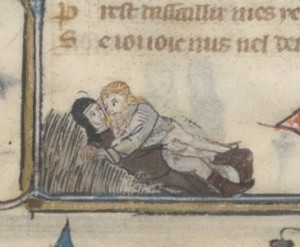 However, I think there’s a bit more to Jeanne’s illuminations than that. In modern culture, as in medieval society, women are all too often viewed as a set of body parts, dissected by the male gaze and by popular media into legs, and breasts, nipped-in waists and airbrushed smiles. In modern culture it’s rare to see male anatomy treated that way. In fact, naked penises cause far more consternation than naked breasts.

This wasn’t the case in medieval England, where dozens of illuminators enjoyed drawing pictures of cocks merrily surging along the margins of pages. But Jeanne’s image of a nun who calmly gathers a crop of penises into her basket is more pointed that most. Standing in the margins of a romance full of mansplaining about female desire and the superior creative powers of men, it’s as if Jeanne’s nun is saying: ‘well, if you have to have a penis to tell a good story … look how many I have!’ 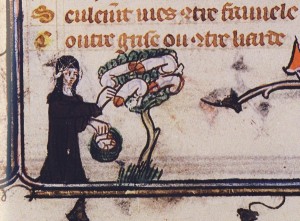 Lucy can also be found at @LucyAllenFWR