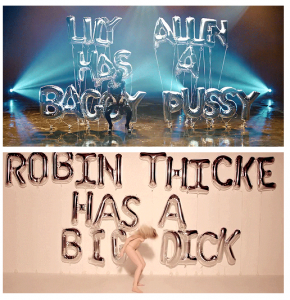 Feminist. Pop. Artist. Three words I’m still struggling to put together. Yesterday, after nicking my godmother’s Sunday Observer, I was drawn into a Twitter debate all about Lily Allen’s new video: “Its Hard Out Here” (for a bitch). I’ve never had much of an opinion on Lily Allen, I don’t think she’s the worst of the worst or the best of the best, she just sort of is, rather like icing sugar, and soft-ball. Yet seemingly she is now being trended all over the internet as the latest controversy in the feminist pop-star debate. If you haven’t been filled in, basically, Allen’s music video depicts her first on a plastic surgery table, being poked and prodded, singing:

“There’s a glass ceiling to break”

“Don’t you want to have somebody who objectifies you?
Have you thought about your butt? Who’s gonna tear it in two?”

It all looks good on paper, we’re thinking wow – some young impressionable women might actually google ‘glass ceiling’ and learn a thing or two about the world. The video later depicts her dancing in front of a sign reading ‘Lily Allen Has a Baggy Pussy’ an obvious critique on Robin Thick’s appalling ’Blurred Lines‘ (directed rather painfully by a woman: Diane Martel – I’m not giving men any more right than women to be objectifying, but one might hope that having ‘all the same bits’ would entitle you to SOME moral questioning of a video discussing the ‘blurred lines’ between saying yes and saying no to sex – or underneath the bullshit: was she raped or not, oh I don’t know, it wasn’t my fault, she was giving me mixed messages…really?)  The criticisms of the video declare that the film is racist, as the majority of dancers in Allen’s music video are black women who ‘twerk’, have their asses slapped, and are obviously not in control of  anything going on. The critique has been headed by Guardian writer Suzanne Moore, who I have to say makes a very good case:

“We are not post-racism any more than we are post-feminism. This is the context into which this video falls: a white middle-class woman playing ringleader to anonymous black women. Maybe there is a knowing wink here I missed. But I haven’t missed years of black women writing about how their bodies are used for white people to write their own scripts all over them”

However I’m inclined to stand somewhere between Moore and feminist performance artist and rock/punk icon Amanda Palmer who told the Independent:

“Say what you like about it or the provocation it caused, but it’s generated enthusiasm [about feminism] that hasn’t existed in my lifetime. A window has opened and if we don’t stick a fucking log through it, it will close.”

To be honest, I agree with both articles, but my biggest problem with the whole thing is the disadvantaged position all of these female artists put themselves in (Amanda Palmer not included) by seeming to have no idea of the semiotic readings of their work. If you put a woman on all fours behind a white woman, yes that racial connotation, if you put a naked woman (who incidentally looks underage) on a giant ball, it reads that she’s riding a testicle, licking the shaft of a “hammer”. You can read into anything – it doesn’t necessarily matter on its own, but you have to know what your selling, otherwise your just a tool for perpetuating sexism, and basically just down right objectification across the board – after all – men are not just their genitalia…but that’s another debate. Beyonce can call herself a feminist all she likes, but as far as I’ve found, there is no song she sings that is not about, for, or because of men in content, and she’s certainly not shaking her ass all over the TV for the benefit of women out there. But I do think Allen could have saved herself on this one, she could have taken a stand, she could have proved to the masses that she not only does she “have a brain” but that she is actually willing to USE it, even if she loses some sales over it. If she had stood by her lyric ”if you can’t detect the sarcasm, you’ve misunderstood” and come back to the criticism with a loud and clear, “Of course its about race, racism and sexism are the same argument, especially in this industry. Can you not tell, that I’m making a point of how black bodies are objectified? How both white and black bodies are made to look ridiculous by trying to imitate the dancing styles of black cultures, and the hair and make-up of white cultures? How its all such a big farce, a big, ridiculous joke, of which women, white women, black women, curvy women, slim women, women are all the butt? I am subverting these things, making them even more obvious and in your face, because no-one seems to realise that Miley Cyrus is putting sex and teddy bears on a stage and saying it’s okay, and Robin Thicke is basically making pornographic music videos that justify rape, and you know what, I just thought something kind of had to be said.” Ah – if only. Instead what we got was:

“[This video] has nothing to do with race, at all,” Allen responded yesterday in a post titled Privilege, Superiority and Misconceptions. “[It] is meant to be a lighthearted satirical video that deals with objectification of women within modern pop culture … The message is clear.”

I really hope that I am not underestimating their ignorance, and that they are, all just a bit consumed with the industry and the media and the un-reality of it all, because if they are completely aware of the sexist, not to mention racial connotations of these images: 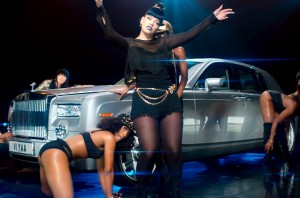 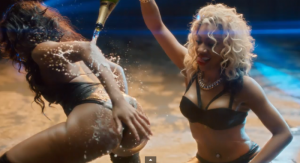 and are still happy to tell me it’s not about race – then I’m sorry, but we have a very serious problem. I look at these images and I think, yes Lily, the message is clear, it’s just such a shame, that its not the one your thinking of.

Ama Budge: A performance artist turned freelance writer commenting on gender inequalities, reflecting on my own challenges and experiences as a mixed-race Londoner and most importantly taking note, in awe, of the extraordinary resilience of human kinds striving for be better, and to love.

One thought on “Lily Allen – Feminist Pop Artist? at Petals fall from my afro like autumn”