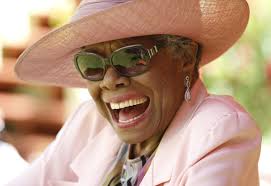 For Maya: Dance Like I Got Diamonds by Eris Z.V at For Harriet

I was no more than twelve years old when I was asked to read Maya’s “Still I Rise” at a Black History program for my church. I was working hard to memorize the lines and as I was practicing, my mother told me that I wasn’t allowed to say one of the lines:

“Does my sexiness upset you? Does it come as a surprise that I dance like I’ve got diamonds at the meeting of my thighs?”

I knew why saying sexy at church probably wasn’t the right thing to do. But what was the hold up about the diamonds? There was nothing wrong with those right? Diamonds weren’t unholy. I looked at my thighs often after that. My brown legs that grew bigger and thicker and still the thought of bedazzled thighs wasn’t something absurd for a 90s kid. Who didn’t have jeans with rhinestones on them? 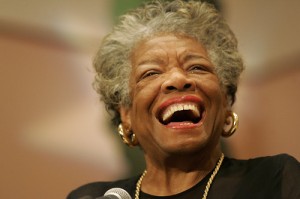 “A Rainbow In Somebody’s Cloud”: A Tribute for Dr. Maya Angelou at Crunk Feminist Collective

“If growing up is painful for the Southern Black girl, being aware of her displacement is the rust on the razor that threatens the throat.  It is an unnecessary insult.”   -Maya Angelou, I Know Why The Caged Bird Sings

If you were ever blessed to be in the same room with her, you knew she was magic.  And when she spoke the room stood still, held breath, knees touching knees, eyes begging for silence to keep from missing even a whisper of her words, beckoning attitude, calm, wisdom and brilliance all at once. Her words were generous gifts she shared abundantly, painting pictures with poems on the tip of her tongue.  She was like a grandmother cipher, a master teacher, a wonder.  She was a warrior and a survivor, an overcomer and a leader.  Her politics would not allow her to be “put in her place.”  Instead she made space where none existed and started telling blackgirl stories when they weren’t yet in style.  Her righteous resistance and loving demeanor, recorded in six autobiographies, made you want to know her.  She felt like a family member, a friend, a twin.  In her I saw all the beauty of black womanhood I was attempting to capture and I knew if I could just make it to the room (where she was), I would be forever changed.  I was.  I felt her presence and I will undoubtedly feel her absence. ….

Upon news of Maya Angelou’s death my first thought was ‘there are not enough words to do justice to her achievements, her legacy and her influence upon both the literary scene and humanity as a whole.’

The mounting accolades clearly indicate that her ability to express through prose and poetry emotions, reality and a personal and collective history touched many people. Much of the content in the work of this ‘Phenomenal woman’ came from her bitter real life experiences. She grew up during segregation, aged 7 she was raped and at 17 years old she became a single mother. …

Please add any others you have read in the comments!