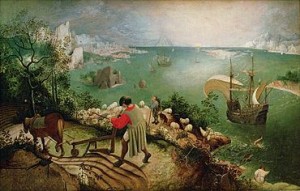 Every now and again, because I don’t know any better, I end up engaging with my favourite brand of Idiot on the Internet, the intellectual mansplainer. You know the sort of thing: you mention you’re studying late-medieval women’s reading, and they start to explain to you how Derrida helped them understand why it’d be better to read Chaucer. Or Shakespeare. Or, you mention gendered violence and they explain – more in sorrow than in anger – that men have always fought wars while women stayed home raised the babies, and history really teaches us how bad men have always had it. If you’re lucky – and I’m sometimes very lucky, because writing like a dyslexic does have a delightful tendency to make people underestimate you – they’ll eventually offer to dazzle you with the beauty of their logic. Ingrained in this discourse will be terms like ‘playing devil’s advocate’ or ‘the inherent bias of women’s studies’ or ‘the importance of looking at things objectively,’ or ‘letting the facts speak for themselves’.

Except, you’ll have the sneaking sense it isn’t.

We’re encouraged to believe that education teaches us how to argue impartially, how to set aside personal bias, and find objective truths (or at the very least, falsify obviously biased and incomplete perceptions of truth). But I think we ignore a fundamental inequality before we even begin to debate.

The image at the top of this page is a painting, once attributed to Breugel, and the subject of a poem by Auden. Both painting and poem make the point that, while the Greek myth traditionally centres on Icarus, the rash boy who escaped prison in Crete on wings made of wax and then fell to his death because he flew too close to the sun, the tragedy is only personal. If you take the perspective of the ploughman in the foreground of the picture, or the ‘expensive delicate ship’ in the ocean, the object falling out of the sky and the pair of limbs just visible in the bottom right corner of the painting are unimportant.

This is – I would argue – a really blokey way of looking at myth, or narrative at all. For the painter, for Auden – for William Carlos Williams, who thought Auden’s poem was just so damn awesome he’d have a crack at it too – this perspective is novel and exciting. There is a strong sense of these men giving themselves a pat on the back for imagining the scene in such a new and unusual way, with the supposed ‘main character’ reduced to a speck in the corner.

Both history and fiction de-centre women’s views a lot of the time. Researching medieval women, you spend a lot of time looking at the negative space between men’s communications to get a sense of the position of women. Establishing a valid narrative often requires a lot of caveats, a lot of uncertainty, because the perspective that is so strikingly novel in the Icarus painting is just plain normal here. This de-centred position isn’t a rhetorical or logical posture, a debate-team tactic you can congratulate yourself for knowing – it’s the default place from which you have to begin.

But there’s something even more problematic about the way the narratives we’re used to hearing when we hear about women in the past shape the way we interpret those women. I’m reading a medieval romance at the moment, which is supposedly an exploration of how men and women uphold truth and justice. In theory, it’s a lovely story of how truth wins out over treachery. In reality, I think it’s a story of how female truth is constantly de-centred, never accepted as objective fact.

This romance is full to bursting with untrustworthy male characters. The best of them – the hero of the piece – has no qualms about impersonating a monk in order to extract a confession on false pretenses. This character, the Earl of Tolous, falls precipitously ‘in love’ with his enemy’s wife on the strength of a description of her physical charms. He even accepts a sworn oath of manly loyalty from one of his enemy’s prisoners because this man is willing to promise him a glimpse of the beloved (aka, stalking 101). 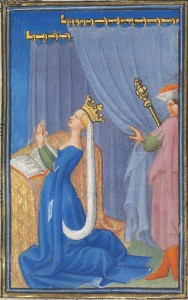 from the Belles Heures of the Duc du Berry. Image from this site.

The meeting is set up for the woman’s chapel. She turns up, dressed in her most expensive clothes, while he comes disguised as a hermit so that her husband’s men won’t discover him. Keeping perfectly in-character, he begs her for alms, and she gives him a handful of coins and a gold ring. And then she leaves again.

This woman demonstrates over and over that she’s utterly true to her word: in fact, she has a totally objective view of the truth, insisting upon telling her villainous husband when he’s legally and morally wrong, and refusing to break a vow of secrecy even when it could save her life. This aspect of her character is repeatedly set to one side by the other characters – except two chillingly manipulative would-be rapists who set out to blackmail her into committing adultery and, when she refuses, frame her for adultery anyway. This is the point at which Our Noble Hero really shows his mettle … by completely failing to take her innocence on trust. Instead, he leans on the Old Boys’ network, and fixes things with the woman’s confessor so that he can diguise himself as a monk, sneak into the confessional, and interrogate the woman about her guilt or innocence in the guise of her confessor. It’s charming, isn’t it? And needless to say, the entire establishment who refused to believe the woman are perfectly convinced by the word of a man who’s just impersonated a monk.

Despite this cornucopia of male distrustworthiness, the narrative manipulates us to think much harder – and much more suspiciously – about the motives of the woman at the centre of the story. It’s a classic ‘yes, but what did she do to encourage him’ story. As you can imagine, the suspicion focuses on that scene in the chapel when she gives the man who loves her – her husband’s enemy – not only coins, but also a ring. In medieval England, the connotations of this donation are sufficiently ambiguous to make things interesting. In a society where people still do an awful lot of payment-in-kind, it’s not exactly unusual for rich ladies to give pieces of jewellery as alms. And rings do not necessarily symbolise love: they range in purpose, from romantic tokens engraved with mottos, to reliqueries designed to hold bits of dead saint, to the even more passion-killing administrative function of signet rings used to seal boring documents.

For example, check out how many rings this girl’s mother is wearing! Portrait of A Lady With Her Daughter, Barthel Bruyn the Elder (c. 1540). 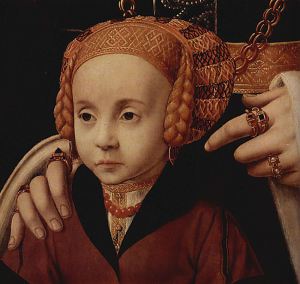 The narrative manipulates us to focus much more energy on the ambiguities of this scene than we do on the straightforward – but, narratively less pivotal – evidence of the male characters’ failure to remain true to their words. After all, it’s the first meeting between the hero and heroine, the first opportunity for us to see whether the heroine will be tempted to betray her husband, or whether she’ll betray the man who loves her to her husband. So, it encourages us to second-guess her motives, to put the evidence of her truthfulness to the side for a moment and dig into the narrative ambiguity. In short, the romance reinforces the idea that women’s truth is to be de-centred and women are to be second-guessed.

This gendered pattern – this narrative structure we find again and again in paintings and fiction and historical narrative – forms the cultural context we all bring with us when we sit down to argue about ‘objective facts’ or to hammer out the ‘truth of the situation’ with the mansplainers. At best, we’re conditioned to expect we’ll have to reconstruct women’s experiences from the margins, from the negative spaces. At worst, we inherit narratives about women that are already prompting us to second-guess those women’s experiences, to categorise them as dubious, uncertain, and problematic.

When I argue with mansplainers about history, or feminism, I’m happy to argue objectively, to play by the rules. But I think we also need to realize that it’s rather easier to make a rhetorical posture of giving up your central position to explore the evidence if that’s something novel and strange to you. It would be too much to say that traditional narratives – in history and in fiction – gaslight us into disbelieving women, but we need to recognise that there is a hierarchy there. When we start to argue about how to establish of ‘objective facts,’ we need to recognise that the ground we’re arguing over is already uneven.

Reading Medieval Books! I rant about women in literature and history, occasionally pausing for breath to be snarky about right-wing misogynists. I promise pretty pictures of manuscripts and a cavalier attitude to sentence structure. [@LucyAllenFWR]