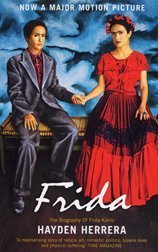 Frida : a biography of Frida Kahlo by Hayden Herrera

This is a long book of a rather short life: Frida Kahlo was injured in a traffic incident when she was eighteen and spent the rest of her life in pain and ‘invalidism’. Regardless of this, her persona was so vibrant and vital that her magnetism outshone her vivid, charismatic work, and if she had lived thirty more years the book would doubtless be three hundred pages longer.

I enjoyed Herrera’s descriptive interpretations of Frida’s paintings and only rarely felt she had gone too far in taking them literally or carrying her own idea further than was justified. My highlight was her rejection of the inclusion of Frida in the Surrealist movement. Herrera unlines the cultural and individual specificity of Frida’s work and the personal authenticity of its non-realistic elements. Her work perhaps owes something to Mexical socialist realism and Latin@ Catholic iconography (the ‘naive’ ex-voto tradition is clearly an influence) but not to self-indulgent European navel-gazing. Herrera explains why Surrealism gained little traction in Mexico:

Mexico had its own magic and myths and did not need foreign notions of fantasy. The self-conscious search for subconscious truths that may have provided European Surrealists with some release from the confines of their rational world and ordinary bourgeois life offered little enchantment in a country where reality and dreams are perceived to merge and miracles are thought to be daily occurrences

I also loved her eloquent writing about Frida’s dress and ‘costume’, which was obviously a hugely important part of her process of identity. Although Frida’s maternal grandfather was indigenous, she had a middle class settler Christian upbringing and dressing in tehuana clothing was a deliberate, political, and perhaps disingenuous act of appropriation, motivated, it seems, by Communist anti-imperialism, aesthetic appreciation and the desire to hide her right leg, which was damaged by childhood polio and became increasingly problematic, probably as her injuries put an end to her therapeutic habits of exercise.

It’s always hard not to see the life of an artist primarily through their work, but according to Herrera, in many periods of her life Frida painted little. She writes that Frida’s relationship to Diego was often more important to her sense of herself than her art. Some of Frida’s writing supports this, but I am uncomfortable with Herrera’s adhesion to the idea, especially as Frida often complained about Diego too. She had many correspondants, friends, and semi-secret lovers, and organised Diego’s life and finances as well as her own. While he floundered without her, however inattentive he could be (apparently he lived for his work; unlike Frida he seems to have painted compulsively from childhood), she seems entirely capable of independence.

Diego was always unfaithful, but while he apparently tolerated Frida’s lesbian affairs, he seemed to be typically macho about her heterosexual ones, which she kept secret. Herrera gives far more attention to these associations with men, although affairs and intimacies with women may have been at least as important to Frida. But perhaps she did not write to her women lovers, or the letters have not come into the public realm, as those written to men have. I usually feel that biographers of bisexual women are annoyingly dismissive in this way: lesbian affairs do not count, just as they didn’t for Diego.

Frida and Diego were ardent Communists, and as world communism shifted and strained their allegiances were juggled too. But they retained the original impulse towards the rights of the people, towards leftist revolutionary and anti-imperialist politics. Frida was frustrated that she could not make political art, but Diego reassured her that her work was a worthwhile political contribution. Later in life, she became a teacher and led students in creating murals for a pulqueria and a women’s laundry. It was fun to read her scornful opinion of European bohemians who ‘did no work’ and spent all their time in idle talk. A message to Euro-USian hipsters not to co-opt Frida as ‘one of us’.

I am because you are: a bookworm trying to decolonise my mind