(Cross-posted with permission from The Feminist Writer) 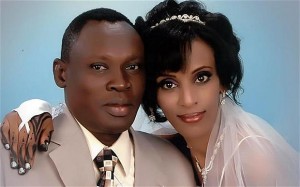 Shackled and chained by her ankles to a wall in squalid, over crowded jail cell in Sudan, Dr Meriam Ibrahim faces execution unless she renounces her religion. Kept alive only because she is eight months pregnant, the 27 year old has been found guilty of apostasy, under Article 126 of the Sudanese Criminal Law, concerning conversion from Islam (assumed to be the ‘default’ religion of Sudan) to another religion, and of adultery under Article 146 of the same law. The Sudanese courts have sentenced her to death by stoning. Ibrahim is charged on the grounds that her marriage to a Christian man from South Sudan is considered invalid under Shari’a Law, for which the penalty is flogging; she is also charged with abandonment of religion, for which the penalty is death. Her first born child, 20 month old Martin, shares Meriam’s jail cell.

Marriage between a Muslim and non Muslim is not common practice in Sudan, and whilst a Muslim man may marry outside his religion (although only permissible with an individual who practices a religion of the “Book”- Judaism, Christianity or Islam), Muslim women are prohibited from doing so, unless he converts to Islam. The Father, according to Sudanese Law, confers religion to their children, meaning that by law, any child that a married couple have will automatically be assumed Muslim. The European Union has demanded that Sudanese authorities free Ibrahim; EU representatives in Khartoum have called on Sudan’s government to respect the freedom of religion as a universal, and respected human right that warrants protection regardless of location. In a press release issued on the 13th May, the EU underlined that “in the context of the UN and African Union Conventions, Sudan had an international obligation to defend and promote the freedom of religion”.

I am particularly surprised that more is not being done to raise awareness of the issues that face the women of Sudan; until stumbling across a tiny article (in ‘Look Magazine’ of all places- who, on another note, I have recently noticed advertising using ‘plus sized’ models, and utilising average sized women, although they still have a long way to go!), I was completely unaware of Dr Meriam’s struggles. Whilst I seem to be labelling this as a ‘feminist issue’, which it surely is, if you take into account that Sudan is one of very few countries that are not a signatory on the Convention on the Elimination of All Forms of Discrimination Against Women, and acknowledge the harsh reality that Sudanese Women are stoned to death, sentenced to ‘adultery’, following brutal attacks, and gang rape, it is clearly a humanitarian issue. Sudan is one of the most prolific executioners in the world, and since 2012, more than 19 people are thought to have been killed through the death penalty. In February, an 18 year woman, was sentenced to death for adultery at nine months pregnant following a gang rape; In June 2012, a 20 year old female was sentenced to death by stoning for adultery; and in 2010, Lubna Hessein, a Sudanese UN official, was flogged for wearing trousers. Meriam Ibrahim’s case, heartbreakingly, is not the first, and will most certainly not be the last, brutal reminder that we still have a long way to go in the fight for international human rights, and widespread equality for women. Fortunately, (although I can hardly suggest this as a positive) Meriam is still alive, and we can still fight for her freedom.  Sign her petition, and pray that whilst she is suffering traumatically, we can free her from the shackles that sentence her to death.