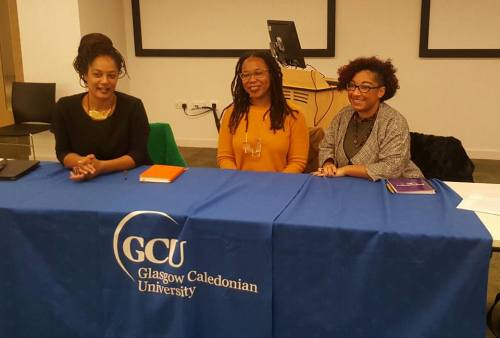 “Where are you from, originally?” Five words that plague people of colour across Britain. It’s essentially code for “if you’re here, then why aren’t you white?” When I was a child that question left me feeling sick, scared. I dreaded it, and have developed something of a sixth sense for when it’s coming. What caused me discomfort was that it positioned me as Other, and was often asked because white people couldn’t wrap their heads around the idea of a Black child belonging in an otherwise white family. Now, having grown up and inhabited this world as a Black woman for 24 years, I have a much thicker skin when it comes to micro-aggressions. But people still ask it. Random strangers still feel entitled to ask that, completely out of the blue, their curiosity outweighing basic courtesy.

That question can’t be separated from what it is to be Black and Scottish. It’s an indicator of how white people consider Scottishness, what can and cannot be Scottish. The underlying assumption around which the question is framed is that Scottish identity is inherently white. So please spare me the justifications that it was “small talk” or “friendly interest”. It’s the politics of us and them playing out on a local scale. The greater the incredulity directed towards my Scottishness, the harder it is for the person asking where I’m from to imagine that the categories of us and them aren’t necessarily poles apart.

Always, people are perplexed when I answer with my hometown, on the west coast of Scotland. This doesn’t compute. And that puzzlement grows when they ask, searching carefully for a combination of words that doesn’t sound racist, where I came from “before that”. The amount of truth I share depends on how salty I’m feeling that day – the maternity unit of the Southern General Hospital in Glasgow or, if they try their luck yet again, my mother’s uterus. Talking explicitly about female biology and birth is a great way to return the discomfort – that horror of women’s bodies so often coincides with casual racism.

My Scottish identity is incompatible with their vision of Scottishness. The idea of me having been born “here”, grown up “here”, is fundamentally at odds with their idea of what it is to be Scottish, a vision of Scotland in which the whiteness of natives is ubiquitous. And yet I did grow up “here”, which is why the cognitive dissonance surrounding Scotland’s approach to the politics of Brexit and national identity is so clear to me.

There is a colossal rift between this image of a progressive Scotland committed to social justice and the reality of a Scotland in denial over its colonial legacy. The People Make Glasgow – that’s been our city’s slogan since the Commonwealth Games. Which people, though? Who did make Glasgow? Glasgow merchants of the 18th century amassed fortunes on the back of the slave trade, and slave labour in colonies used to produce tobacco, sugar, and rum. The GOMA, St. Andrew’s in the Square, whole sections of Merchant City – so many of those beautiful buildings were built from that wealth. Wealth created through the exploitation and abuse of Black people. Glasgow wouldn’t exist as we know it without the wealth amassed through slavery, colonialism. That stunning architecture is treated as a source of national pride, but what made it possible is to the shame of Scotland as a nation.

But we don’t like to talk about that. I remember learning about the Empire in school. It was romanticised to the point that the ethics of white people profiting from the slave labour provided by Black people were never unpacked in the classroom. The horror of Imperialism was completely glossed over, the implication being that “civilisation” and a railway system in India made it fair exchange. Of course, making these atrocities palatable for children involves a tacit denial of Black and brown humanity – if British paternalism (and I do include Scotland in that) was overall beneficial, a benign presence across the Empire, then colonial subjects were primitives in need of guidance from white rationality. This construction relies on depicting us as Other, less human than the civilising force of whiteness.

My mum took me to the David Livingstone Centre in Blantyre when I was a kid. At the time, it was just another day out. We saw where he lived, learned that he was a missionary and explorer. Livingstone is even framed as something of a hero for his opposition to the slave trade. That he sought to challenge slavery through “Christianity, Commerce and Civilization” – ridding the continent of barbarism and working towards more efficient ways for Britain to exploit African resources – was largely overlooked. I had intended to revisit the centre before this event, but it is closed for refurbishment.

I don’t recall any specific attention being given to the African men and women on whose lives David Livingstone impacted. His reliance on the slave labour he allegedly stood against, that hypocrisy, wasn’t really considered. The stories of Black men and women were so invisible that I was puzzled by the sticker book I got from the gift shop. It was about a little Black girl who lived in a village, and what did little Black girls have to do with David Livingstone? Still, it was the only sticker book I’d ever got with a Black character, which was so exciting that this line of enquiry receded in my ten year old mind.

None of this history receives due critical exploration. It’s left to fester, and the ways in which Scotland’s history of profiting from slave labour, being a part of Imperial expansion, is largely unaddressed. Existing attitudes cannot be divorced from the historical context that brought them into being.

The narrative of Scottish exceptionalism erases the atrocities of slavery, absolves the Scottish conscience, and allows us to imagine this country as being a fundamentally fairer place than England. The politics of Brexit are not new, and Scotland – in spite of having voted to remain – is not exempt. Scotland has been a part of a context in which that xenophobia and racism has flourished, unchallenged.