(Cross-posted from The Feminist Writer)

These are just a few of the horrendous Tweets posted by Dawkins today: 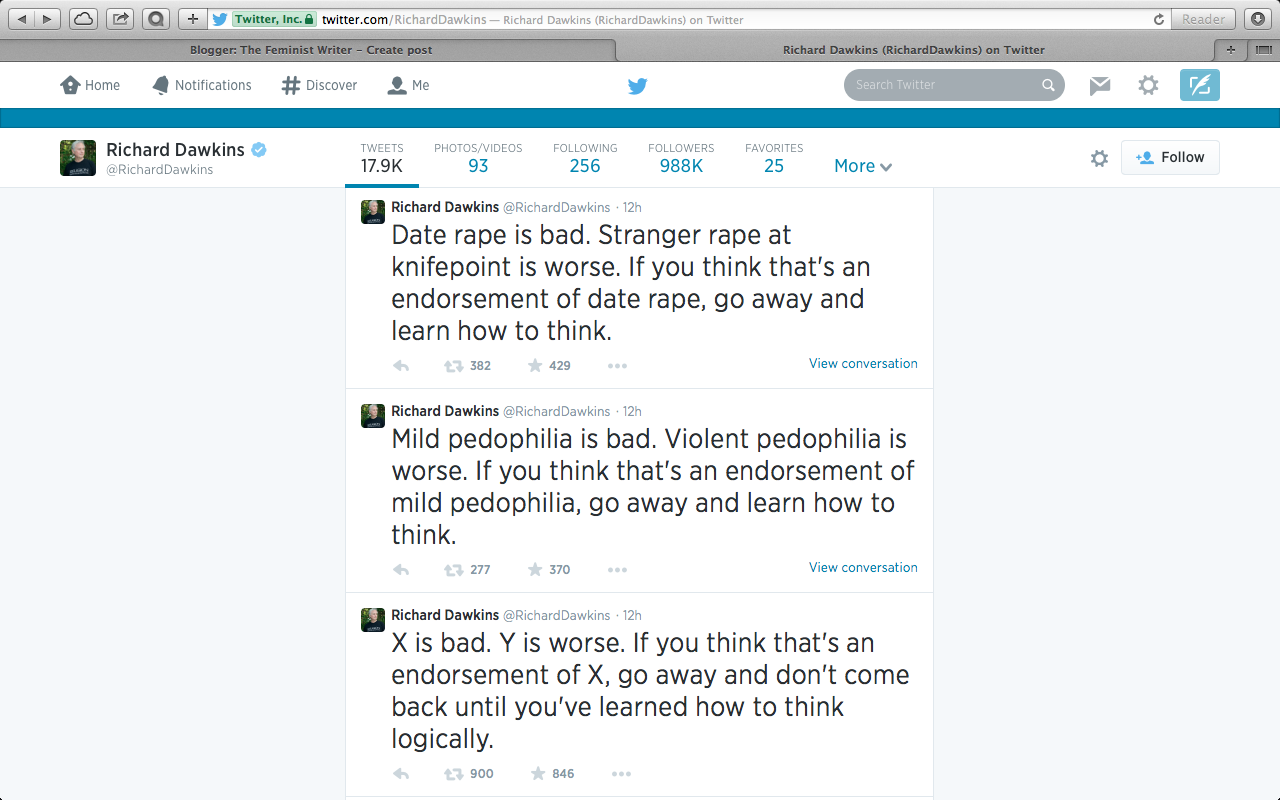 This morning Richard Dawkins took to Twitter to announce the idea that there are varying levels of sexual assault (a view that he has never kept quiet) and one which unsurprisingly caused a ruckus on the social media site. To put briefly, in a discussion about syllogism, Dawkins suggested the enduring rape myth that there are varying degrees of rape, and he was wrong to do so. Based on the misconception that ‘date rape’, or rape by a partner, is less violent and therefore less important than rape by a stranger, Richard Dawkins excellently showcases misogyny in all its glory. Not only is this completely untrue, (let’s look at the facts) anybody who choses to utilise sexual violence as an acceptable example of syllogism clearly undermines those who have gone through the pain of being assaulted, showing complete disregard for survivors.

Dawkins ‘logic’ does not need to be based on such an unnecessarily horrific (and inappropriate) analogy. Rape is rape and all rape is violent. If we look at the lowest statistics recorded by the MOJ and ONS (and reported by Sian Norris in today’s Independent Online), every single one of the 1,100 rapes that occur weekly in the UK is a violent crime. And regardless of whether or not you know the perpetrator (even though evidence by Kelly suggests that 89 percent of rape victims know their attacker), the violence still stands. So rape is rape, but Dawkins choses to ‘rank’ sexual violence in terms of severity, and brushes off doing so by suggesting that regardless he is not “endorsing” the lesser of two evils. In fact, I have no issue with catagorising things in terms of severity, but like most women, I have a huge issue with claiming that rape can be categorised dependent on the situation. Richard Dawkins may not be “endorsing” date rape but by suggesting that date rape should be taken less seriously, he is most certainly adding to the difficultly that survivors face when reporting or speaking out about their experiences.

As ‘stranger rape’ is more likely to be reported by the media, it creates the false impression that these assaults are ‘more serious’, and therefore ‘more newsworthy’. The rapes that fit the narrative of what society is told constitutes rape. The rapes where the perpetrator hides in a dark alley way, knife in tow. And the rapes that all too familiarly distance society from the fact that most rapists are actually “husbands, boyfriends, fathers, brothers, colleagues and friends”(as Norris puts it). The very fact that Dawkins alludes to varying levels of sexual assault only heightens the culture of victim shaming, and encourages the questioning of the victims behaviour (what was she wearing? Did she go home with him? Didn’t she like him?) We shift the focus away from the perpetrator and examine the behaviour of the victim instead. This is never ok. The fault of the rape lies with the rapist and never with the victim regardless. This negative portrayal of the victim not only heavily supports the enduring rape myth, but also has a huge impact on women’s access to justice, which is heartbreaking. Considering the ideology that partner rape is ‘less serious’, in a society where only 15 percent of rapes are reported, 89 percent of sexual assaults are committed by an acquaintance, and men like Dawkins encourage such harmful misconceptions, is it any wonder that so many rapes go unreported?