Skip to content
Cross-posted from: Adventures in Biography
Originally published: 08.11.15 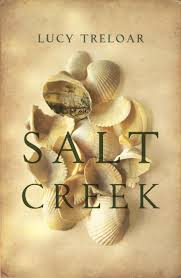 In 1855 the well-to-do Finch family falls on hard times and is forced live and farm in the Coorong, on the remote southeast coast of South Australia.  Cue struggles with the landscape and clashes with the local Ngarrindjeri people.  But first-time novelist Lucy Treloar subverts the typical white Australian pioneer story in interesting and complex ways.  Nothing in this fascinating and beautifully written story turns out as expected.

Papa Finch is an entrepreneur always eyeing off the next big opportunity but the family’s ramshackle homestead on the Coorong is a blow to everyone’s pride.  His four teenage boys are forced to forfeit their education to work on the run.  Mama, grieving for two younger children who died just before the family left Adelaide, is not quite herself and the responsibility for running the household falls to the eldest daughter, fifteen year old Hettie.

The entire novel is narrated by Hettie, and Treloar is note-perfect in capturing her voice and personality.  Hettie resents her younger sister Addie for failing to help in the house.  She resents her older brothers for being self-assured and obnoxious.  And most of all she resents her father for forcing the family from their lovely Adelaide life and home.  Hettie longs to escape into a life of her own choosing but can’t see how.  She recognises that even marriage would only offer a different set of constraints.

Mama was contented in England but left it for Papa. It might have been the same for your mother; I don’t know.  And then we came here, all through Papa’s choices, his risks, because of him.  One day I will leave here and it will not be with another man or because of a man.  Men make so free with the lives of others, and judge themselves so little when things go awry.  I wonder at the presumption of it.

And things do go awry, badly.  Papa Finch considers himself and enlightened man, an emancipist and supporter of William Wilberforce.  ‘All men are created equal before God,’ he tells Tull, the Aboriginal boy who becomes almost one of the family. But Papa’s ideas of himself, and his ideals, falter in the face of reality – with far-reaching consequences for everyone.

Far more than just a frontier story, Salt Creek is also a vivid exploration of character and family dynamics.  The sibling interactions, in particular, are wonderfully evoked.  The various personalities buffet and scrape against each other, revealing and concealing in equal measure.  As the children grow into adulthood their views of each other grow too, in ways that are unexpected but not out of character.

Lucy Treloar is the kind of emerging writer that gives hope to us all.  She was the winner of the 2014 Commonwealth Short Story Prize (Pacific Region), the 2013 Writing Australia Unpublished Manuscript Award and an Asialink Writer’s Residency.

If this is what her first novel looks like, I can’t wait for the next ones.  Salt Creek is an evocative, thoughtful and at times visceral work of literary fiction.  It is also a pacy read that kept me turning pages well past my bed time.  Some critics might deign to label it middlebrow but Beth Driscoll, in a recent piece for Sydney Review of Books, reclaims status for this much-maligned term.

We can recognise the middlebrow by a set of features. It is associated with women and the middle class. It is reverent towards legitimate culture and thus concerned with quality – the middlebrow shies away from the trashy – at the same time as it is enmeshed in commerce and explicitly mediated. The middlebrow is concerned with the domestic and recreational rather than the academic or professional, it is emotional, and it has a quality of ethical seriousness. These features can combine to make a book vibrantly social, a catalyst for passionate conversations between readers.

I think Salt Creek will, or should, be a catalyst for some passionate conversations.

And it’s not just me: a review of Salt Creek by Peter Pierce in the Australian on August 29 describes it as ‘brilliant… In its larger compass, Salt Creek refigures the historical novel in Australia, compelling us to unfix assumptions about frontier life, domestic and economic, relations between men and women, and generations, European and indigenous people.’

I have a young family and a demanding day job but in my spare time (!) I’m working on a biography of one of Australia’s first white colonists: Elizabeth MacArthur. So far in the course of working on the manuscript I’ve met some wonderful people and travelled to some amazing places. I thought it was about time to share the wonder and my amazement.