Cross-posted from Adventures in Biography

This week I waved my son off to camp – he’ll be away for nine days.  Elizabeth Macarthur waved her young sons off too, to be educated in England, for years at a time.  I don’t think I can imagine how she felt.  Or can I?

Inga Clendinnen explored the problem at length in The History Question: Who owns the past? (Quarterly Essay, Issue 23)

We cannot post ourselves back in time. People really did think differently then – or at least we must proceed on that assumption…It is true that historians are cruelly limited. We can’t do conversations; we can’t (usually) do monologues.  But what we can do is become increasingly knowledgeable about the contexts in which particular actions, including the writing of particular words, took place.  We do this not by emphatic time leaps, which would condemn us to live forever sealed into our own narrow cultural and temporal world, but by reconstructing as delicately, as comprehensively and as subtly as we are able, not only the material but also the cultural settings in which other people, once living, now dead, lived out their lives.

Clendinnen herself quotes novelist Henry James, who in 1901 wrote:

You may multiply the little facts that can be got from pictures and documents, relics and prints, as much as you like – the real thing is almost impossible to do, and in its essence the whole effect is as nought: I mean the invention, the representation of the old CONSCIOUSNESS, the soul, the sense, the horizon, the vision of individuals in whose minds half the things that make ours, that make the modern world were non-existent.  You have to think with your modern apparatus a man, a woman – or rather fifty – whose own thinking was intensely otherwise conditioned, you have to simplify back by an amazing tour de force – and even then it’s all humbug.

Elizabeth Macarthur had nine children.  Seven survived infancy and five (all four sons and one of the three daughters) were sent to England to be educated.  At no time did the seven siblings ever gather together under the same roof because by the time the youngest was born the older ones were overseas. 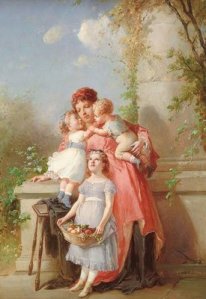 There was nowhere in New South Wales to adequately educate the children and, even if there were, Elizabeth felt ‘it would be unjust towards them to confine them to so narrow a society. My desire is that they may see a little more of the world, & better learn to appreciate this retirement.’[1]

Like many immigrants before and since, John and Elizabeth had painted for their children a glowing picture of England as Home. Elizabeth, writing to a friend in England, acknowledged that she and John may have gilded the lily somewhat, noting that the children considered England as no less than ‘a seat of happiness and delight’ which contained ‘all that can be gratifying to their senses’ and where ‘of course they are there to possess all they desire.’ Elizabeth sensibly recognised that the children needed to experience England for themselves but she did think that some of them would subsequently choose to make New South Wales their home.

In 1798 Elizabeth’s eldest son Edward, aged eight, was sent to school in England. To his mother’s chagrin he ‘almost quitted me without a tear.’[2]Edward travelled in the care of a Captain Hogan, aboard the Marquis Cornwallis[3], and for company sailed with Norfolk King, also eight and Lieutenant (later Governor) King’s illegitimate son who up until now had been living with his father and stepmother on Norfolk Island.[4]

(Therein lies a whole other story! A blog post for another day, perhaps.  I wonder if the boys attended the same school.)

In 1801 Elizabeth’s husband John sailed to England, without his wife.  With him were the couple’s eldest daughter Elizabeth (then aged nine) and the second son John (then aged seven).  Son John would remain in England and become a lawyer.  Elizabeth corresponded with all her children but she never saw John again and was devastated when he died suddenly, in his mid-thirties.

Husband John and daughter Elizabeth returned to NSW in 1805 but a scant four years later John sailed to England again, in the wake of the overthrow of Governor Bligh.  The two youngest Macarthur boys, James (then aged 9) and William(then aged 7), travelled with him.  John and the two boys did not return home until 1817, when the boys were aged 18 and 16.

Given the very real dangers of each voyage, the unknown elements faced by the children in England, and any mother’s anxiety for her children I DO feel able to guess at Elizabeth’s emotional response.  But I won’t endeavour to describe it – instead I’ll trust in my readers’ abilities to guess at Elizabeth’s emotional response too.

Adventures in Biography I have a young family and a demanding day job but in my spare time (!) I’m working on a biography of one of Australia’s first white colonists: Elizabeth Macarthur. So far in the course of working on the manuscript I’ve met some wonderful people and travelled to some amazing places. I thought it was about time to share the wonder and my amazement.