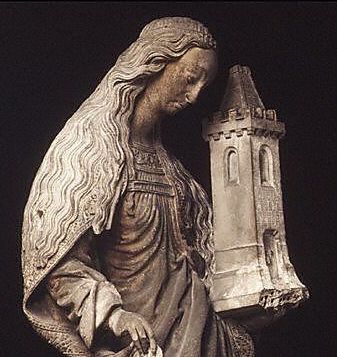 The juxtaposition of a semi-autobiographical novel by an eponymous ‘stone butch’ with the encyclopaedic work of a seventh-century bishop (and, weirdly, Pope John Paul II’s choice of patron saint for the internet), might seem incongruous. Yet, for the medieval writer too, watery permeability represents normative femininity, as well as sexual openness, and stands implicitly opposed to women of stone.

For Isidore of Seville, writing more than a millennium before Feinberg, the association between female masculinity and stoniness would have seemed obvious. As he writes, the natural, biological disposition of women is to be ‘soft’ – and not only soft, but liquid; watery. Medieval medical theories, on which his work draws, argued that women’s bodies must be moist and soft, like melted wax in its semi-liquid form, so that they could be impregnated. Like that soft wax, imprinted with the form of whatever was stamped into it to make a seal, a woman’s womb needed to be able to hold the imprint of a harder masculine form. By logical extension, stone symbolises obdurate refusal to melt, to yield, to conceive.

These quotations were in my mind as I read Astrida Neimanis’ book, Bodies of Water: Posthuman Feminist Phenomenology. The books argues that water offers us a way to think beyond the idea of human beings as discrete, bounded individuals, and it’s a lovely, would-be convincing thesis. The same water that fills our bodies, Neimanis points out, also circulates through flora and fauna, minute watery organisms and also storm drains, filtration tanks, rivers and seas. It brings us into contact with organic and inorganic structures and – we’re reminded – with structures of thought that might challenge Western Enlightenment-style philosophy and spur us on to a more ethical engagement with the world. But the watery permeability Neimanis so enthusiastically urges us all to celebrate in our own bodies is a concept that comes with some murky gendered undercurrents. One reviewer (generous and thoughtful about the book as a whole), writes that, as ‘a female … mother and feminist,’ the ‘porosity of the body’ can feel ‘terrifying, and the fantasy of individual transcendence rather appealing’. After all, it’s most male – and white, and Western, and wealthy – individuals who have been most inclined to discourse about their magnificent individuality, most likely to contribute to the ethical/ecological problems Neimanis identifies, and least likely to suffer as a result of bodily penetrability.

An interesting contrast to Bodies of Water is Cohen’s Stone: An Ecology of the Inhuman. The two books share an ethical interest in locating (or dislocating) the human in relation to much wider ecological systems and subjects, as their titles make clear. (Side note: why is it that cutting-edge theorists sound so much like Thomas Browne in their titling practices?) Yet, reading Cohen’s book alongside Bodies of Water, I found myself wondering how differently that book might have turned out had Neimanis written, not about watery embodiment, but about stony bodies. After all, we’re also made of mineral; stone carries the fossils that remind us of the prehistoric seabeds teeming with watery life, from which we ultimately originate. Cohen reminds us that medieval philosophers understood stones to be admixtures of water and earth. They considered that, as the proportions of water to earth varied, so too did the properties of the stones themselves, from lumpen rocks resembling mud solidified, to translucent, crystalline structures of water held in fixity. Jewels – precious stones – were understood to be water transmuted, hardened, organised into its most impenetrable form.

The metaphors clung in my mind, because the chapter I’m writing engages with the same issues of women, sexuality, water and stone. My text begins life as a French chanson de geste in the eleventh century: a story of the wars between Saracens and Christians, filled with images of bloody battles and besieged castles, black-skinned giants and mysterious, miraculous relics, and – of course – dramatic images of Saracen men and women converting to Christianity to reassure medieval English and French readers of the truth of their faith. The central female character is Floripas, the beautiful daughter of the Saracen Sultan of Babylon, who falls in love with the French knight Guy of Burgundy, and betrays her father in order to protect the French.

In most versions of the narrative, Floripas is not only beautiful, but also fiery: violent in her anger, and resolute in her fierce convictions. Her character is shaped by contemporary Western European stereotypes of women from the Middle East, by the belief that such people – exposed to hot suns – were correspondingly ‘heated’ in their dispositions, governed by the element of fire and given to anger and passion. However, because Floripas is also represented as beautiful, noble, and a perfect subject for conversion to Christianity, she displays a more yielding, melting, ‘watery’ side to her nature, too. Ultimately, she accepts Christian baptism, stripping off her clothes to reveal a beautiful female body that stirs the admiration of all male onlookers, and submerging herself in the water of the font. 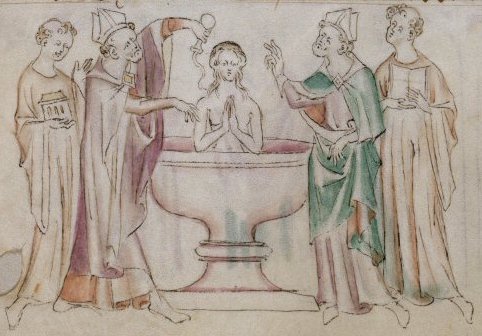 Floripas’ watery incorporation into Christianity is part and parcel of her final performance of sexualised femininity: her baptism happens only once she has forgone the final visual boundary to her nakedness and revealed herself to the crowds of peering French knights.

That’s the usual version of the story, anyway. In the version I’m interested in – a relatively late retelling, written sometime in the early fifteenth century – there’s a marked shift. Instead of being portrayed as a passionate, fire-and-water woman, who blazes with heat and melts with desire for Christian baptism and for her Christian beloved, Floripas is emotionally cold, even chilling in her casual violence and lack of compassion. Her body repels sexual advances and sexualizing gazes – it is never revealed, naked, prior to her baptism – and it resembles nothing so much as the stony tower she commands. That tower is a literal bulwark against the ocean, battered by seawater, an impenetrable fortress. Protected by its stony bounds, Floripas rebuffs unwelcome Saracen suitors and would-be Saracen rapists alike.

It would be tempting to celebrate this rewriting of Floripas’ character as a proto-feminist victory: the construction of a strong, empowered woman, who might even have a touch of the ‘stone butch’ about her. But that simple reading is too easily muddied. Romances about Christians and Saracens – like this one – invariably play out against a backdrop of anxiety about cross-cultural or cross-racial unions, graphically expressed in terms of fears of monstrous births. And it is impossible not to recognise that, when Floripas is rewritten into a stony woman, capable of repelling sexual violence, she is also rendered symbolically infertile. The romance sterilises the threat her fertile, non-Western body might represent to the Christian community into which she is ultimately incorporated. At the same time, and despite these anxieties, Cohen’s work reminds us to see Floripas as more than a stony woman, but as water in stone, water as stone, a character hardened and solidified from watery origins into crystalline fixity. Meanwhile, Feinberg’s formulation – and, I’d suggest, the women who have embraced the idea of the ‘stone butch’ – offers us the tantalising possibility of interpreting ‘stony’ femininity as a positive image, a deliberate way of constructing a diamond-hard, impenetrable, imperviously bounded self.

It’s hard, if not impossible, to reconcile these differing potential readings. But the sheer endurance of these watery, stony ideas of women’s bodies convinces me it’s important to keep trying, or at least to keep trying to understand how that binary opposition of stone and water might be split apart or interposed, to offer us a more realistic view of women’s own desires to remain watery, fluid, and unfixed, yet also controlled, bounded and contained.

Reading Medieval Books! :I rant about women in literature and history, occasionally pausing for breath to be snarky about right-wing misogynists. I promise pretty pictures of manuscripts and a cavalier attitude to sentence structure.  @LucyAllenFWR