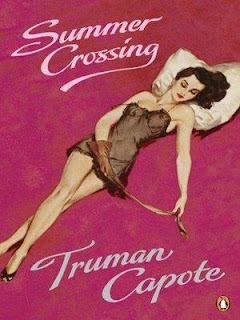 A shocking end to an awry romance and a romance that you perhaps wished, never ignited in the first place.

If like me , you too were allured by the rosy cover, dreamy title and the credible author then perhaps our sentiments would match.

After the raving success of his Non-Fiction Crime novel, In Cold Blood and the darling endeavors of Breakfast at Tiffany’s, one hardly expect anything less from Mr. Capote and his ability to enrapture you in a tale simple yet magnificent.
So just like me, you pick this book excitedly dreaming of another masterful story that leaves you longing for more, only to have your expectations sorely hurt.

Feel free to weep your disappointment or swear profusely if you must – I’m not ready to do that just yet.
It’s not long before the reader understands the difference between Grady McNeil and Clyde Manzer. A young high society girl and her steamy affair with a working-class gentleman, set in New York soon after World War II (honey, it’s never going to work).

Obviously, their relationship is rampant and reckless with barely any room (left) for character development or any ambition. Clyde Manzer seems insipid, Grady made me roll my eyes and before you know it, disaster has struck speedingly chased by tragedy (quite literally).

At this point, every Capote fan would be shaking their heads in disapproval wondering why would anyone want to publish this?
Don’t dismiss it just yet. As many flaws and faults, there may be, this is where we see the literary skill of  19-year-old Capote and some skill did he have.

It’s simple, well-strung and absolutely gorgeous if you pay attention to the language.  Capote knows how to convey sentiments and emotions with just the right adjectives and trust me when I say, it’s a real treat. You can almost see why Capote would have been ashamed of this book since it doesn’t really live up to the mark as some of his most renowned work.

For no real reason, I found myself oddly comparing Summer Crossing to Brooklyn by Colm Toibin – both the female leads were filling the empty voids in their lives with, let’s say, romance from men not quite from their alley and life doesn’t seem to get better from there for either.

My suggestion would be to hang on until the end of Summer Crossing if you could endure it. An author’s maiden novel almost always says more about themselves as individuals than the story itself. It’s almost like a quick glimpse into their own character before they pursue more successful ventures and I’m certain genuine Capote fans would appreciate this little insight.