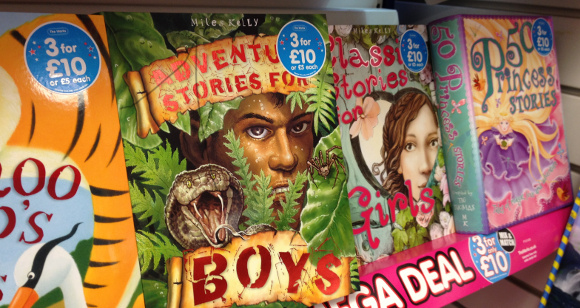 The Let Books Be Books campaign has attracted much media coverage and high profile support, but labelling books ‘for boys’ is sometimes defended as a useful tool for getting boys to read. Tricia Lowther argues that gendering reading doesn’t help literacy, and may even be harming boys’ chances.

The Let Books Be Books campaign asks children’s publishers to take the ‘Boys’ and ‘Girls’ labels off books and allow children real free choice in the kinds of stories and activity books that interest them. The campaign has had success with publishers and retailers like Usborne , Parragon, and Paperchase, and seen support from prominent authors, but of course there have been people who disagree with us, and one argument in particular keeps cropping up; gendered books are acceptable because we need to encourage boys to read more.  END_OF_DOCUMENT_TOKEN_TO_BE_REPLACED

This morning I changed a wheel on my car for the first time in my life. I felt ridiculously proud of myself for completing such a simple task. Then I climbed out of our bathroom window onto a roof and cleared up some broken glass that’s been there since the storm smashed one of our windows last week. Meanwhile, my husband looked after the kids and did the hoovering in an attempt to win the war against fleas that he is currently waging. Things seem to work out this way in our household. I am drawn to practical tasks that are usually considered a traditionally male activity, and my husband often finds himself looking after the kids. This is partly why I felt so proud of myself for changing the tyre, not only because I had the sense of a task well done, but also because I know that I am stepping outside of my traditional gender role and proving that women can do anything they want. This might seem like a big jump to lots of people -it’s just a tyre after all, but I think it’s significant. END_OF_DOCUMENT_TOKEN_TO_BE_REPLACED