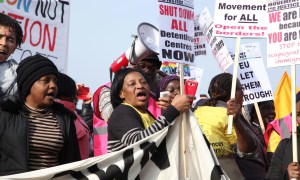 Lucy was 23 when she fell pregnant, following a brutal gang rape by three men in her home country. After receiving threats on her life, she fled to the UK, believing she would be safe here – only to find herself locked up in Yarl’s Wood detention centre at five months pregnant. This is her story, as told to Sarah Graham.

After the attack, I knew people were after me. I was getting threatening letters, I saw men in front of our house, and my mum and I knew the police would not help. I told her it was too much for me; my life was in danger and I had to leave. We sold almost everything we had for me to escape, and friends and relatives contributed to the cost.

I didn’t know what to expect from England. I never thought in my life I would travel, so when it happened I didn’t think of anything except that I had to find somewhere safe for myself and my baby.

When I landed in the UK, they started interrogating me at the airport. They took my bag and my phone, so I couldn’t contact my mum, and the guy told me that if I didn’t tell him the truth, he was going to lock me up. I was really scared. END_OF_DOCUMENT_TOKEN_TO_BE_REPLACED