The story of Eve receiving the fruit of knowledge from the Serpent in Genesis is familiar, but most people don’t know that Western European artists depicted the Serpent as a Goddess from about 1200 to the 1600s. The earliest example I’ve found is a sculpture from Notre Dame de Paris during the 1200s. The Snake Goddess is coiled around the Tree of Wisdom:

Many illuminated manuscripts show the Snake Goddess coiled around the tree in the same way, like the kundalini serpent winding around the human spine, but wearing a ladies coif:

Suppressed Histories Archive : The Suppressed Histories Archives uncovers the realities of women’s lives, internationally and across time, asking questions about patriarchy and slavery, conquest and aboriginality. About mother-right, female spheres of power, indigenous philosophies of spirit– and the historical chemistry of their repression. Even more important, their role in resisting oppression. A global perspective on women’s history offers fresh and diverse conceptions of women’s power, as well as of men and gender borders. It overturns stereotypes of race and class, and the structures of domination that enforce them. It digs under the usual story of lords and rulers, looking for hidden strands, and reweaves knowledge from the divided fields of history, archaeology, linguistics and folk tradition. So we cast a wide arc, looking for patterns and gaps and contradictions which, where vested power interests are at stake, are trigger points for controversy. Some of the flashpoints are women’s power; neolithic female figurines; gender-egalitarian mother-right cultures; patriarchy; witch-hunts; “heresies” such as goddess veneration or shamans; and the rise and fall of empires, including the doctrines of supremacy and inferiority that prop up all systems of domination.

A young woman transgresses against the strict gender roles of her time.Katharine Edgar considers the seed of truth behind ghost stories such as Sarkless Kitty

Between 1787 and 1809, at Lowna in the valley of Farndale in the North Yorkshire Moors, 18 men were killed by the same woman, according to the local guidebooks. Born around 1767, local girl Kitty Garthwaite was an unlikely serial killer. Not least because, according to the same legend, she died earlier in 1787, before the alleged murders even began. 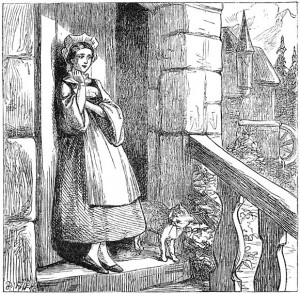 Kitty Garthwaite was, of course, a ghost. She haunted the ford, or so we read, under the name of ‘Sarkless Kitty’. ‘Sark’ was a local name for a shift or undershirt. ‘Sarkless’, or entirely naked, Kitty would sit either in the ford or on a branch next to it, depending on the version of the legend you read, and lure innocent and unwary male travellers to their doom. She did so for revenge: having been seduced and abandoned by a local farmer she is said to have drowned herself in the ford while pregnant. Then, it seems, she visited her vengeance first upon her lover and next upon a succession of innocent men, until a service of exorcism put paid to the murders. END_OF_DOCUMENT_TOKEN_TO_BE_REPLACED