A brief foreword: this is the fifth essay in my series on sex, gender, and sexuality. Parts 1, 2, 3, and 4 are available here on Sister Outrider. With this essay, I challenge the notion that gender can be repurposed as anything other than a hierarchy. This one is dedicated to E, a stellar lesbian and feminist.

“It is impossible to name and act against oppression if there are no nameable oppressors.” – Mary Daly

Gender is a fiction created by patriarchy, a hierarchy imposed by men to ensure their dominance over women. The idea of a gender binary was established in order to justify the subordination of women by positioning our oppression by men as a natural state of affairs, the result of how characteristics innately held by men and women manifest. Framing gender as natural not only serves to depoliticise the hierarchy, but uses essentialism in order to convince women that radical resistance to gender – the means of our oppression – is futile. Hopelessness breeds apathy, which undermines social change more effectively than any overt challenge. If abolishing gender (and therefore dismantling patriarchy) is an unobtainable goal, women have no choice but to accept our status as second-class citizens of the world. To treat gender as inherent is to accept a patriarchal blueprint for the design of society.

Gender is a hierarchy that enables men to be dominant and conditions women into subservience. As gender is a fundamental element of white supremacist capitalist patriarchy (hooks, 1984) it is particularly disconcerting to see elements of queer discourse argue that gender is not only innately held but sacrosanct. Far from being a radical alternative to the status quo, the project of “queering” gender only serves to replicate the standards set by patriarchy through its essentialism. A queer understanding of gender does not challenge patriarchy in any meaningful way – rather than encouraging people to resist the standards set by patriarchy, it offers them a way to embrace it. Queer politics have not challenged traditional gender roles so much as breathed fresh life into them – therein lies the danger.  END_OF_DOCUMENT_TOKEN_TO_BE_REPLACED

Women only spaces are a fundamental part of the feminist movement and represent women’s right to self-determination and liberation. We’re collecting short stories, poetry, essays, plays, flash fiction, and all other forms of the written word that illustrate and explore what we mean as a ‘woman only space’ and the importance of these spaces for the feminist and womanist movements and women in general: as a space which prioritises women’s voices over mens and that refuses to allow men to dictate the terms of the conversation.

We expect that many of the submissions we receive will have fundamental disagreements about this issue. We believe that that this discussion is essential to the health and future of the feminist and womanist movements. We want to hear and support the voices of all feminists and womanists working respectfully to liberate all women.

The proceeds of this book will be used to support this platform covering the costs of hosting and website maintenance and development. 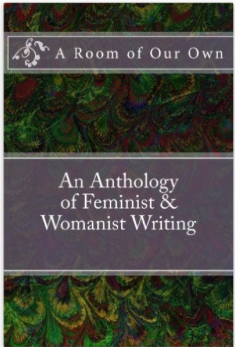 A Room of Our Own: An Anthology of Feminist & Womanist Writing is now available:

A Room of Our Own: An Anthology of Feminist & Womanist Writing is a collection of essays, poetry, and short stories written by women. The proceeds of this book will be used to support this platform covering the costs of hosting and website maintenance and development.