Skip to content
Cross-posted from: Murder of Goths
Originally published: 05.01.17

My kids have reached that age. Now the infuriating conversations have started.

“Boys do this, girls don’t”

No matter that, up until this point, I’ve always encouraged both children to play with and like whatever they want. I’ve been very clear that there are no “boys toys” and “girls toys”. Myself, and the rest of the family, have done whatever we can to make clear to both children that girls and boys are more alike than different.

Unfortunately I’m not able to control the environment my children grow up in as they get that bit older.

Here’s the thing that gets me though, I hadn’t quite considered how strange small child logic can be, as evidenced by conversations with my 4 year old son.

I expected conversations on the colour pink (my son loves pink but needed explicit permission to like it – depressing but easily solved), wearing dresses (see pink), boys being stronger (slightly more difficult given his sister is two years younger and so obviously not as strong).

What I didn’t expect was just how many things my son would attribute to his being a boy and his sister being a girl.

We’ve now had conversations on whether boys are always older than girls, whether only boys can read (because his sister can’t read – this is despite girls in his class reading), whether girls always have vampire teeth (I never said my daughter wasn’t odd).

At the age of 4 years and 9 months my son’s grasp of the differences between the sexes is not just sketchy, it’s plain weird.

I put a lot of this down to the severe polarisation of the sexes in the media, in advertising, even in the very toys they play with. He has been taught that there are two ways to divide the world. It shows in the way he processes information on new people, first deciding whether they are a Child or an Adult. Then whether they are a Girl or a Boy.

And our, ever helpful, media does nothing to discourage this. Just take a look at some of the ways that the two sexes are marketed at, this breakdown on toy catalogues by Let Toys Be Toys makes it very clear.

97% of children playing with guns/weapons and war toys were boys.

Only 13% of children playing at ‘caregiving’ activities were boys. Only one catalogue included any boys playing with fashion or baby dolls (Early Learning Centre).

Right now my son is only just learning to read, so words are not his main way of processing information, he uses visual cues. 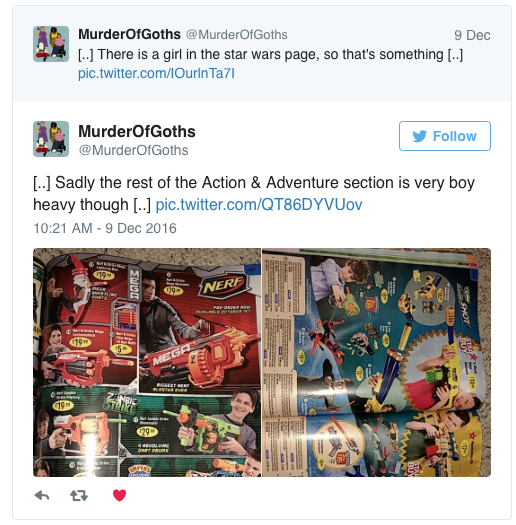 So if he sees mostly boys playing with guns, well then of course guns become a boy thing. He’s given the message that not only are guns not for girls, but also that boys should definitely like guns.

Same goes for dolls, he’s taught that girls should like them and that he, a boy, should not.

Bit by bit a wall gets built up around what he should and shouldn’t like.

He has no idea that the only difference between the sexes is physical, because at his age there is little to no visible difference in the physical differences between girls and boys. They have very similar physiques (which, as an aside, makes boys and girls t-shirts and trousers utterly pointless). So, knowing that the world just has to be divided into boy and girl, he uses whatever cues he can find, and the easiest way to do this is to look at his immediate world and extrapolate it outwards.

So if he likes something, it’s a boy thing. And his features become a sign of a boy.

If his sister likes something, it’s a girl thing. And her features become a sign of a girl.

Which is where the conversations about vampire teeth and age come in.

As he gets older his immediate world expands to include the media that he consumes, the other children around him, and the reactions of other adults.

Now the programs he watches and the images around him get used to process new information. 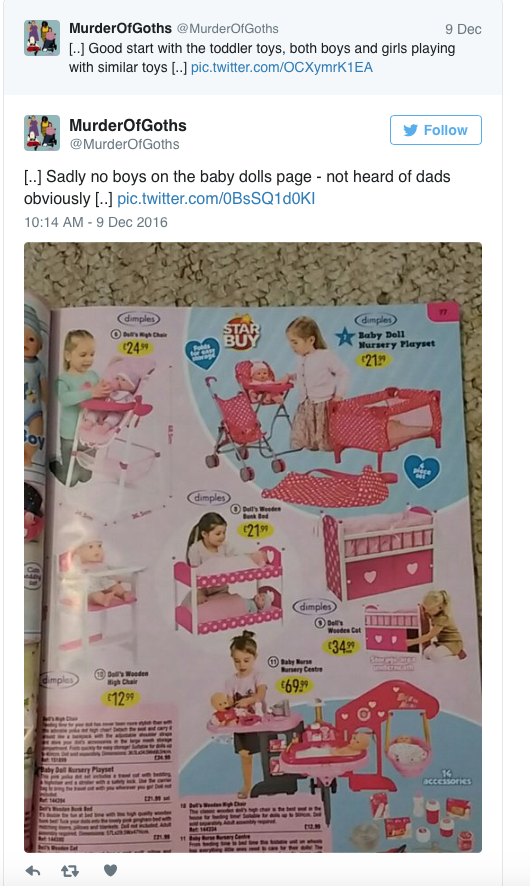 So he starts to learn that boys cannot care for babies. Up until this point he’s been really interested in babies, both dolls and real babies, so imagine my surprise when this Christmas he was upset at receiving a baby doll. What’s changed in the short time since we started buying Christmas presents a few months ago? Oh yes.. he started school. At his nursery both boys and girls played with the dolls, but now he’s learnt that something he was drawn to before is wrong. I think it speaks volumes that he still wanted his new doll brought up to his bedroom despite saying he didn’t like it.

I really hate that my son is starting to learn he has to act a certain way. That he has to perform these restrictive gender roles, whether they come naturally to him or not.

I’d love to see a world where things weren’t divided into boy and girl categories, no more male interests and female interests. Just interests, varied and wonderful. We’re nowhere near that though, in fact it often feels like it’s getting even further away.

I’d like to say that it’s just a right wing, conservative view too, but it doesn’t seem to be.

I had a conversation with someone a while back, a wonderful woman who I adore, who is tolerant and loving and accepting of difference. But she said something which made me pause. She was talking about a friend with a child who was born male but is now raised as a girl. Not much older than my son. “Of course”, she said, “they knew as early as a year old, because she liked playing with girls toys”.

Even within a very liberal viewpoint it seems arbitrary gender roles are still a powerful force. We’ve got a long way to go.

Murder of the Goths : A personal blog covering all sorts of topics that affect my life. Whether it’s parenting, disability, geeky stuff, feminism, paganism or (of course) goth subjects. Twitter: @MurderofGoths