White women sold out the sisterhood and the world by voting for Trump.  via @doublexmag

According to CNN, 53 percent of white female voters voted for Donald Trump. Fifty-three percent. More than half of white women voted for the man who bragged about committing sexual assault on tape, who said he would appoint Supreme Court justices who would overturn Roe v. Wade, who has promised to undo legislation that has afforded health insurance to millions of uninsured Americans, whose parental leave plan is a joke, who has spent his campaign dehumanizing nonwhite people, who has spent 30-plus years in the public eye reducing women to their sexual attributes. More than half of white women looked at the first viable female candidate for the presidency, a wildly competent and overqualified career public servant, and said, “Trump that bitch.”

What leads a woman to vote for a man who has made it very clear that he believes she is subhuman? Self-loathing. Hypocrisy. And, of course, a racist view of the world that privileges white supremacy over every other issue. …

There was a familiar sense of rhythm to last night’s unfolding drama. Initial indications that the polls were rights, signs of an early concession, but then a tightening in key battlegrounds, markets tumbling, despair on the faces of one set of supporters and finally the emergence of a victorious but stunned blonde bombshell to take in the gravity of what he had done.

As the executive director of Britain Stronger in Europe, I lived through all this on that night in June. I have consequently spent the last four months seeking to understand why we lost – all the time looking across the Atlantic as similar mistakes were made by the Clinton campaign – a poll-driven strategy based on the risks of the opponent, a failure to address her biggest weaknesses, and even an over-reliance on celebrity endorsements. …

On the dawn of the Donald Trump era, those of us on the centre and left will look around the debris in despair. The temptation to lash out will be strong. It is easy to patronise or vilify those who did not agree with us. But this would be both wrong and counter-productive.

It’s too soon for you by Talat Yaqoob

I write it’s what I do, it’s how I feel better – some will see this as self indulgent, others will agree with it and probably will, or have, done the same. I don’t really care.

But the reason I am compelled to write is because Twitter, as you would expect, has become 140 characters of “I told you so”. That has as much nuance in it as, well, the new President. It’s too soon for you. if your first response is “I saw this coming, we should have done x” Just, go away. Do what the rest of us are doing and be angry, be upset, look for hope. Revel in your echo chamber for a few minutes and pretend it didn’t happen whilst you consider what positive role you could have to make it better. My first tweet was about misogyny and white men endorsing it. That’s where I was at, followed by this is absolutely a race and poverty issue (along with some evidence). All of those things are related by the way. That’s it, that’s as far as I have thought right now.

There is no single answer to Trump (no matter how hard you try) and if you think there is you are woefully naive about both the institutionalized political culture, the intersections of prejudice within our society and the psychology that goes with it. Trumps presidency rests on a number of things that I cannot put into a tweet, if I try my head might explode with rage. In fact, I did try and it cause me to cry even more than I was. …

‘Grab ’em by the pussy” was the line that was supposed to have ended Donald Trump’s campaign for presidency. Instead it turned out to be one of the most astonishing and successful strategies for the highest office. In a campaign based on racism, misogyny and bullying, Trump proved that boasting about sexually assaulting women, far from ruining a man’s career, can boost it; and white women voted for him in droves. Grab ’em by the pussy, indeed. The first black American president will now be succeeded by a man endorsed by the Ku Klux Klan. This, according to Trump and his supporters, male and female, is what the American dream actually looks like.

A lot will be written about how Trump’s victory represents a backlash of rage from the white working classes. The election of Trump, this narrative goes, proves how these people feel ignored by the elite politicians and metropolitan media. We need to hear more from these people, the argument continues, and how they have suffered because of globalisation, the demise of industry, the opioid crisis, the death of the American dream. …

This poem by Warsan Shire was shared across social media. You can find a list of her books here. 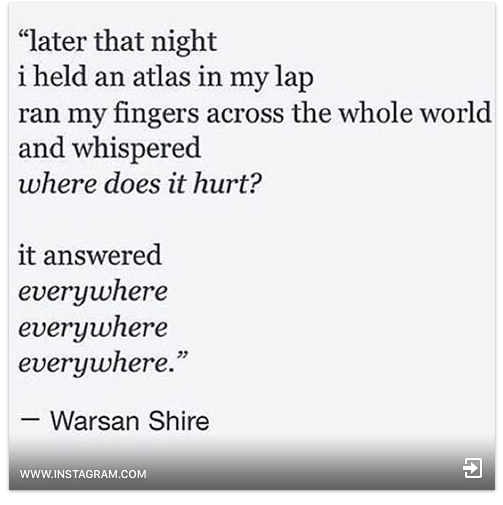 Please link to other articles written by women in the comments and I will keep updating this page.

Get Your People at Crunk Feminist Collective

As Expected, Black Women Were By Far Hillary Clinton’s Most Reliable Voting Bloc at For Harriet

After the election of Donald Trump, we will not mourn. We will organize | Gloria Steinem