Skip to content
Cross-posted from: Her Story Arc
Originally published: 06.05.17

It’s hard to know where to start. When it was announced that Wonder Woman would be getting her own movie years ago, I was excited that the debut would coincide with the year I anticipated graduating from my MBA program. A year and a half ago I was excited that the movie debut would coincide with having the first female President of the United States. What a year 2017 would be, I thought.

My MBA graduation has ended up being delayed a year, and that’s fine. But we all know how the presidential election turned out. We march. We protest. We persist. We aren’t sorry.

Director Patty Jenkins and actress Gal Gadot gave us the uplifting and powerful story we yearned to see. When I pre-ordered Friday night showing tickets online we ended up going to a later showing because the early ones were sold out. The early reviews were flooding in by Friday morning last week. Projections of a blockbusting weekend were thrown back and forth across the internet.

Well, the results are in now:

Wonder Woman is the highest grossing opening weekend film directed by a woman EVER. It also beats Iron Man ($98.6 million),  Captain America: The First Avenger ($95 million), Guardians of the Galaxy ($94.3 million), and Doctor Strange ($85 million). It gives me immense satisfaction to list those numbers. Yeah, there’s definitely going to be a sequel.

Jill Lepore, the author of The Secret History of Wonder Woman, says it best in her review in the New Yorker:

it’s a relief to watch a woman fight back. A lot of viewers will come to this film, as I did, after the most ordinary of days, punch-card-punching, office-meeting, kid-raising, news-watching days, days of seeing women being silenced, ignored, dismissed, threatened, undermined, underpaid, and underestimated, and, somehow, taking it. I am not proud that I found comfort in watching a woman in a golden tiara and thigh-high boots clobber hordes of terrible men. But I did.

Without further ado, here is how Wonder Woman completely aced our Scale of Inclusivity, earning 15/15 points without breaking a sweat.

It starts with the Queen of Themyscira, Hippolyta, and the leadership she shows her daughter Diana. She is strong, physically and otherwise, as well as respected by all the Amazons. She hopes for peace eternal on their idyllic island, and tries to protect Diana from learning the ways of warfare even at the risk of not preparing her daughter for the future.

Hippolyta ultimately is unable to hold Diana back from learning how to be a fierce warrior. This is due to Diana’s strong will, but also due to Antiope, who is the best warrior among the Amazons. Antiope begins training Diana in secret against Hippolyta’s will. I loved that Antiope was a visibly older woman with rough skin and a sinewy neck. She looks and acts every inch the bad-ass myth that she represents.

I think it goes without saying that on an island full of Amazon women, the movie passes the Bechdel test. But even more than just being an island of all women, the actresses playing those women are real-life athletes. This is one of the ways the film goes way above and beyond the incredibly low bar set for women in action movies. In an article on the EW one of the athletes describes the day they filmed the beach skirmish:

Ence says she was surprised by how easy it was to tap into her inner warrior, especially when surrounded by a whole horde of fellow soldiers. “The first day we were on-set with all of our swords and shields, it felt like a different type of power,” she says. “And we looked awesome.”

It is clear that Director Patty Jenkins wanted every aspect of Wonder Woman to be authentic and real. Women CAN be Amazons. Women ARE warriors. This film was just a vehicle to show it. And good god, does the slo-mo action show it. I haven’t seen such awesome warrior women fight scenes since Xena went off the air.

Then there is the story itself. It’s good. It’s really good. Like, certified Fresh good. It will make you laugh, it will make you cry, and it is wholesome and the conclusion is beautiful. Am I hyping this up too much for you?

Gal Gadot breathes life into a character that has already lived for decades. She realizes millions of women’s dreams and imaginations. She has donned the mantle of a legend and raised the bar even higher in doing so. I don’t think she smashed any glass ceilings so much as scared them into non-existence. Jill Lepore captured the feeling perfectly in her review when she stated that “Gadot’s Wonder Woman doesn’t fight for rights because she transcends that fight; she is unfettered by it and insensible to it, an implausible post-feminist hero.” 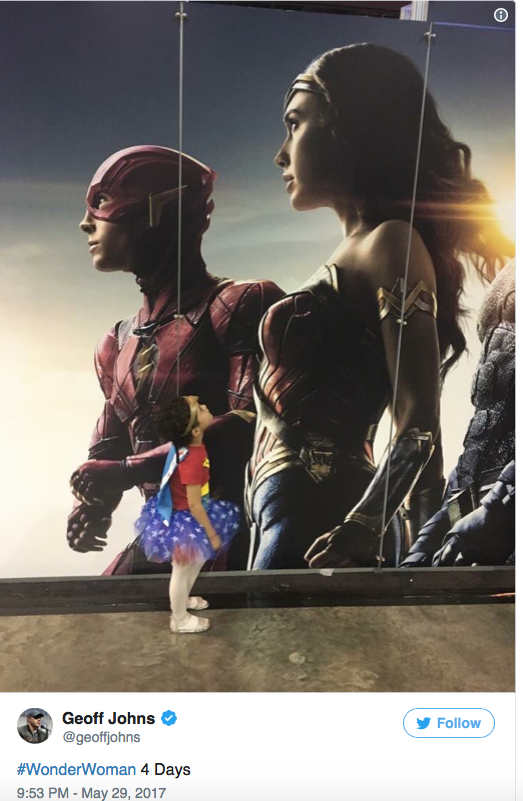 HerStoryArc.com: Her Story Arc is dedicated to finding and praising honest and progressive stories of women and girls in the media.