Cross-posted with permission from Glosswitch

Lynx. The perfect Secret Santa gift for the male colleague you don’t know and/or don’t particularly like. The heterosexual male equivalent of one of those Baylis & Harding “looks vaguely like Molton Brown but totally isn’t” bath sets. The year before last, I received the latter, my partner got the former. What this says about us as colleagues is something I’d rather not consider.

Having had some Lynx in our household within the recent past, I can say at least this with certainty: the Lynx Effect doesn’t work. One whiff of Africa, Cool Metal, Excite or Fever does not provoke unstoppable horniness. It provokes, first, amusement because it smells so fucking awful, second, vague memories of some really creepy lads in Year 10, and, finally, a migraine. Only the first of these is even remotely fun.

Back in the 1980s there was, sort of, a female equivalent to the Lynx Effect, when Impulse used the “men just can’t help acting on it” tagline.

That’s right, ladies, when a man you’ve never met before gives you flowers, you’ll know he’s acting on Impulse (which obviously makes it totally reassuring and not at all stalkerish, or so my 11-year-old self used to think). As ever, the expectations placed on men in response to female body spray were considerably lower than those placed on women in response to Lynx. Women detect a little Lynx Apolloand they’re whipping their bras off to reveal ample, if somewhat artificial looking, tits. Men get a noseful of Impulse Chic and the most they’re expected to do is proffer some limp Gladioli (tip: most women would rather have booze. Or even a book token, to be honest). To make matters worse the ball is then back in the woman’s court (he’s bought you some flowers, you say? Time to whip your bra off to reveal ample …). It’s not great, is it? And all this is before we get into the deeply disturbing overtones of a tagline which suggests men can’t really control themselves anyhow.

It’s bad enough that the ads play on the idea of male pursuer, female pursued (always in a deeply heteronormative context). These days Lynx are taking it one step further. Consider this delightful ad: 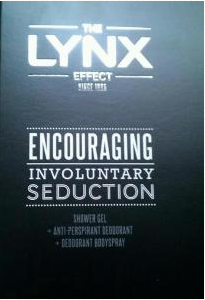 The Lynx Effect. Encouraging Involuntary Seduction, that is, making someone who doesn’t actively want to have sex with you become more “amenable”. A bit like too much alcohol, or Rohypnol, only cheaper. “Involuntary” because, let’s face it, choice always gets in the way. Clearly Lynx understands what a young man wants: not any form of sexual interaction, but someone, anyone, into whom to stick his cock. Sod giving them flowers (that’s so 1980s). Let’s drug them (or let’s at least kid ourselves that a lungful of Lynx Rise will do anything other than repulse).

Sometimes it’s really difficult to explain the concept of rape culture to the unconvinced. Some people still believe there is rape – which bad people commit – and a surrounding environment which does nothing to condone it. If they do nothing else, Lynx adverts, with their jaunty sexism and teenage bedroom fantasies, make it that little bit easier to show how distorted concepts of seduction feed into a belief that consent doesn’t really matter. The word “involuntary” should never be used in adverts aimed at young men at a stage when they need to learn what enthusiastic consent really means. If sex involves anything that is not voluntary, it needs to stop.

It’s not that Lynx actually works. Of course it doesn’t. Everyone, even those using it, knows it doesn’t. But spreading the notion that it is reasonable to get people to whom you’re attracted to do things they don’t really want to do – that can have an effect. This is not selling seduction; it’s legitimising fantasies of assault.

Glosswitch can be found on twitter and at the New Statesman

See the following on consent:
Consent Is Sexy And Sexy Is Mandatory by @Umlolidunno
Reclaim the Night (2008) by @Finn_Mackay
Why Radical Feminism by @TerriStrange
Rape in Marriage by @CathElliott
Rape in Marriage: Part Two by @CathElliott
50 Shades – Sexual Abuse by @50shadesabuse
The Lynx Effect: Rape Culture in Action by @Glosswitch
The Single Most Important Aspect of Sex by @SianFergs