Skip to content
Cross-posted from: Not a zero sum game
Originally published: 28.01.16

Let me just say at the outset: I don’t really care about sports all that much. I don’t watch it, much less play it. The only reason I’m even talking about it now is because it’s a hugely important aspect of modern culture, in terms of both the passion that individual people invest in it and the multi-billion part it plays in the global economy. But as a person, I don’t really have a dog in this fight. I didn’t even watch the Olympics when they were in he UK, meaning in my timezone and not at some outlandish hour in the middle of the night, so. Having cleared up any confusion about my Olympic aspirations, let’s have a look at what equality in sports looks like for trans men and trans women.

The International Olympic Committee recently released the guidelines from its November “Consensus Meeting on Sex Reassignment and Hyperandrogenism“, in which it asserts a commitment to “ensure insofar as possible that trans athletes are not excluded from the opportunity to participate in sporting competition”. This is a pretty decent goal in and of itself, taken in isolation. It’s not clear to me why the commission is especially concerned with trans athletes; even at the largest estimates, they constitute a tiny proportion of the population. The crossover between people who are trans and people who are good enough to try for the Olympic games must be infinitesimal indeed; but OK, it’s the trendy minority right now, and the Caster Semenya case is still ringing in everyone’s ears, so fair enough.

Having said all that, here are the guidelines that the Commission recommends for trans athletes to be allowed to enter competition under their declared gender:

In short, trans men (who were born female) face virtually no restrictions on entering events as men; they get in practically on their own say-so. Trans women (born male) also get to compete in events on their own say-so, but there are some extra rules put in place to prevent mischievous declarations of womanhood, presumably to avoid cheating. [Side note: if you think there is no cheating at that level of sport I have two words for you: Lance Armstrong]

If one is an equality-minded person who is not an expert in Olympic history, this ought to give one pause: why, one might ask, do trans women come under all of this extra suspicion? How is it fair to put additional burdens on trans women compared to trans men? Isn’t this, when all is said and done, sexist? Or worse – isn’t the Commission tacitly accusing trans women as a group of being especially mendacious?

These sorts of questions are often levelled, mostly in the form of accusations, at feminists (or rather “purported” feminists, according to Maria Miller) who seek to have extra clarity and regulation around access for trans women to other previously female-only institutions, mostly services such as rape crisis centres, women’s shelters, women’s prisons and public changing rooms. The fact that little attention tends to be paid to trans men in what is sometimes derisively called “the toilet wars” is often offered as evidence of simple bigotry on the part of the people (nearly all of them women) who raise these concerns rather than allowing themselves to fall into complacent progressivism.

Lots and lots has already been written about the fact that allowing pre-op trans women to compete in women’s Olympic events is a bad and unfair idea. Lots and lots. But if I’m honest, I’m a bit baffled by the outrage about this specific new provision. I mean, you don’t shot putt with your willy, do you? It doesn’t seem super relevant to me what you’ve got in your pants during the 100 meters race or whatever. Because the tricky thing here is not the legal gender (as recognised – or not – by the bewilderingly diverse set of countries who participate in the Games) or genitals of the various participants, but other things like stride, strength and reach that are set at puberty and don’t recall change much with testosterone levels and the like. On that score, trans women have had an advantage over females for donkey’s years, and this new concession is just a piece of PR on behalf on the IOC.

In any case, if testosterone is such a game changer in athletics, then why did the IOC set the maximum level of the hormone at roughly three times as high as naturally occurs in the female population? Does that mean that female athletes can now take the (banned) hormone as a supplement to enhance their performance in line with their trans rivals, and be exempt from the doping rules? Yeah, right. I didn’t think so.

I could go on at some length about bone density, grip strength and all that sort of thing, but I’m not a physiologist and to be honest that sort of stuff bores me, so here’s a picture instead of a thousand words: see if you can guess which, among the two groups of sportspeople below, are the trans individuals: 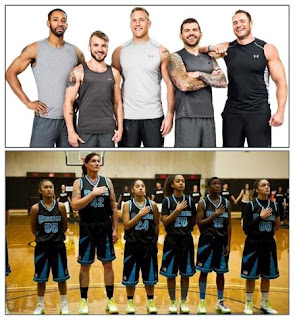 What we have here with this new and trendy IOC guidance is what Anatole France satirically alluded to with the quip that “in its majestic equality, the law forbids rich and poor alike to sleep under bridges, beg in the streets and steal loaves of bread.” In other words, absolute equality imposed on an unequal situation, which ensures that the people who stand to lose out are those already most disadvantaged. That is also what Maria Miller, in the asinine report that she’s been defending with such po-faced self righteousness, is trying to achieve: gain a reputation for being an advocate for equality by taking away every provision that is seen as either especially onerous (GRC process) or especially necessary (the so called spousal ‘veto’) and letting everyone play on a level playing field. Only it’s kind of funny that the equalising provisions always seem to be getting rid of things that one particular group dislikes, and that another particular group is very defensive of. I wonder what those two groups might be called! And whether they share any other biological, social, economic and political characteristics!

The thing is, the playing field is not level. It’s never been level, and short of something like Aamer Rahma’s definition of Reverse Racism, it’s not going to wake up being level anytime soon. It’s easy to hide hostility to women’s humanity behind this cant of equal treatment, in which we treat everyone equally by strenuously resisting any changes to an unequal status quo. Keith Vaz was at it when he recommended that (overwhelmingly male) rape suspects be granted the same anonymity as (overwhelmingly – I know, who’d have thunk it! – female) rape victims. A million neck-beard fedoras are at it when they bemoan the fact that feminists don’t really believe in equality or they’d be allowed to punch women. Everyone who’s ever objected to women-only shortlists, boardroom quotas, scholarships for women and BME students, US-style affirmative action and so on is at it. It’s the very very cosiest of perches: you’re an upstanding member of a liberal society who just hates inequality! The fact that you hate the kind of “inequality” that might take the shine off your own silver spoon is, well, let’s just not get into that. Look! Over there! Feminists are being hateful!

The funny thing with this whole hoo-ha of course is that sport is the very last thing that’s about equality. Sporting competitions of all kinds are a celebration of extraordinary, rare, and unequally distributed talent (as well as tenacity, perseverance, and luck). Not that this stops the IOC from zealously enforcing equality as much as possible in areas other than gender: everything from drugs to special swimsuits to Oscar Pistorius’s blades has been banned by the IOC before now, in an attempt to make competition as fair as possible. When there’s a serious chance that male athletes might come up against a competitor who is using some technology or ability they’ve had no access to, it’s all canvassed in deadly earnest. But when it’s only a bunch of girls coming up against people half again their height, body mass and testosterone level? Oh, c’mmon. Don’t you care about equality?