Skip to content
Cross-posted from: Not the News in Brief
Originally published: 11.04.17

The thing about toilets is that it’s not just about toilets. It’s about ALL the public spaces which could present a risk to women and/or children because of factors such as confined space, being locked in, restricted escape routes and being either explicitly or potentially in a state of partial/complete undress. These spaces include public toilets (no, not your private one at home, stupid), changing rooms in shops, gymns, leisure centres etc, prisons, rape crisis centres, dormitories, shelters and more.

The reason these spaces are SEX-segregated is that men can be violent and sexually predatory towards women and children (no, not all men, and yes, women can be violent too). The stats are stark, and divide the sexes up quite neatly according to likelihood of violence and abuse. 98% of sex offenders are men. Most of the victims are women and children. It is not just the most serious sex crimes which inform this public policy of sex-segregation however: there is a whole raft of other, lesser, crimes committed where men have access to women in intimate spaces. These include indecent exposure, voyeurism and sexual harassment. Added to that there are the almost exclusively male types of antisocial behaviour, such as indulging the fetish of listening to women urinate, public masturbation and peeing on the seat.

Some of the behavioural differences between men and women are well documented in the crime stats, but there are other differences too – those of biology. Men for example pee on the seat because they can. They have a penis to pee out of. Women on the other hand have to sit down on the seat to pee. At home it is annoying to have to shout at boyfriends, brothers, husbands or sons who fail to lift the seat before peeing and leave a mess they expect you to clean up, but it is far worse having to wipe up a stranger’s urine before you can sit down. Yes, women do leave drips on the seat sometimes, but copious splashes are largely a male speciality.

Talking of biology, there are different reasons that men and women need the provision of public toilets, apart from the obvious ones. For example, women have periods. Coping with the mess of an unexpected period might require an emergency change of underwear and the washing of bloody hands and/or knickers in the communal sinks. (Not just me right?) It’s embarrassing enough amongst strange women, but at least you can expect a degree of understanding. With men present it becomes mortifying. You might prefer to stay put in the cubicle all day rather than come out and face the shame. As a teenager I would have viewed the buying of a sanitary towel from a machine in the toilets completely unthinkable if boys had been present. In my eyes it would have been tantamount to shouting ‘LOOK AT ME – I’VE GOT A VAGINA!’

On that subject, it’s worth remembering that there is a large range of female people likely to be using the toilets provided in public facilities: it will include very young girls, teenagers just starting menstruation, women with mental health problems/learning disabilities, pregnant women, victims and survivors of rape, assault, male violence, domestic abuse or child sexual abuse, elderly women, women with physical heath problems/frailty, women suffering incontinence or menopausal symptoms, women of faith or with strong religious beliefs, mothers with babies, toddlers or young children who need the toilet and/or sinks, and women and girls in the middle of a bout of cystitis or thrush. That’s just off the top of my head. You can’t always tell by looking at someone whether or not they are surviving or suffering from anything, but it’s fair to assume that some female users of public conveniences will tick some of those boxes.

In conclusion, privacy, comfort AND safety are obviously all important considerations in the design of toilets if they are to be useful to women and girls, and so to be told (as I frequently have been) that ‘you’ll be quite safe: nobody can rape you because the cubicles have locks on the doors’, is an exercise in willfully missing the point.

Despite all this there is a recent trend for changing sex-segregated toilets into ‘gender-neutral’ or unisex toilets. Samira Ahmed tweeted of her experience at the Barbican:

Toilets are being re-designated as ‘gender-neutral’ or unisex in universities all over the US and the UK, and it’s not just in universities. Another Twitter user posted her photo of a toilet on the north Kent coast.

Many similar examples have been shared on social media, with the common denominator being that in every case it is the Ladies toilet which has been sacrificed to the ‘gender-neutral’ trend. Men are essentially now the protected sex. Men, WHETHER OR NOT THEY IDENTIFY AS MEN, are getting the toilets they want, plus access to the women’s toilets. Doesn’t seem fair really does it?

The results of a poll for Loose Women suggested that not everyone is happy with the way things are going: 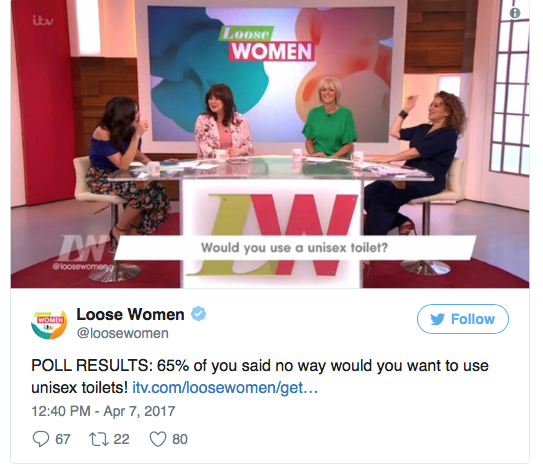 The response to this tweet was a perfect example of the lack of understanding from (mostly) men who could not understand the problem that women might have with unisex toilets. A more interesting question in my view, is why so many men would jump at the chance of using the women’s toilet when they are finally allowed to? A possible explanation, courtesy of  Twitter, is a little unsettling. 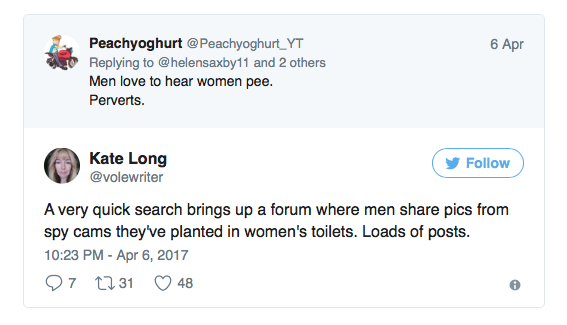 The move towards ‘gender neutral’ toilets is a clumsy attempt to be trans-inclusive before any legislation is even in place, and without thinking it through properly. There are obvious and serious implications for women and girls, which have not been taken into consideration. The kind of low-level sex crimes detailed above are largely opportunistic: if the opportunity is there then someone will be there to take advantage. To those arguing that there is already legislation in place to prevent men abusing women and that therefore these changes will make no difference, I would say that, similarly, there is already a law to prevent abuse against trans people, so why do we need to change anything? It is like arguing against the provision of adequate street lighting because men will attack women anyway.

It may well be true that if a man wants to abuse a woman in a toilet he will do so whatever the sign on the door, but that is no reason to make it easier for him. As it stands at the moment a woman has the right to challenge a male in the Ladies toilet – this at least gives the woman some power, and shows that the law is on her side. The current changes, if they continue to gather pace, will put the boot firmly on the other foot.

Not the News in Briefs: I started this blog to write about the No More Page 3 Campaign and media sexism. As it’s gone on, it’s expanded in subject matter to become a blog about feminist issues in general. @helensaxby11