Skip to content
Cross-posted from: Language: A Guide
Originally published: 11.02.18

Until they were officially abolished last month, I had never heard of the ‘walk-on girls’ who accompanied professional darts players onstage at tournaments. Nor did I know that Formula 1 featured ‘grid girls’ (who have also been axed), that cycling has ‘podium girls’, and that boxing employs ‘ring card girls’ to do the vital job (according to promoter Eddie Hearn) of ‘letting people know what round is coming up’. The issue which has suddenly made these ‘girls’ controversial is not primarily about language (it’s more about broadcasters’ #metoo-fuelled unease with overt displays of sexism). But it does, arguably, have a linguistic dimension.

In 2013 the darts blogger Rich Nank devoted a post to what he called ‘the walk-on girls phenomenon’, in which he defended this invented tradition (born in Blackpool in 1994) against the charge of sexism. 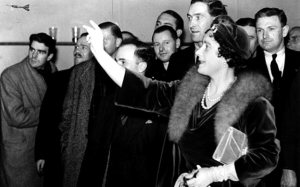 As he saw it, the introduction of ‘walking on’ marked a softening of the traditional view that darts was strictly for the working man, and there was no place in the sport for women (a somewhat unconvincing argument, given that women had been playing darts competitively since the late 1950s). The walk-on girls made good money, they were popular with fans of both sexes, and some of them had become as famous as the players. Why, they were practically feminist role models! But there was one thing about them that even Mr Nank found slightly dodgy:

I’ve never been comfortable with calling them ‘girls’ mainly because they are grown women, but maybe that’s just me.

Actually, Rich, it’s not just you. Well, it might be just you if we’re talking about darts (along with F1, cycling, boxing, and possibly other sports too niche to have surfaced in recent media reports—are there, perhaps, ‘lawn girls’ in croquet? ‘Octagon girls’ in cage fighting?) But in the wider world this ‘girls’ thing has been a bone of contention for at least the last 45 years. And recently the debate has become more polarised.

In 2011, for instance, a contributor to Radio Times complained about the media’s relentless use of the Ernie K Doe track ‘Here Come the Girls’ (along with the Sugababes cover ‘Girls’):

It is a truth universally acknowledged that whenever women unite in television observational documentaries or entertainment shows to achieve a purpose, their steps will be dogged by Here Come the Girls… a suppurating bubo of a song, made famous by a series of witless television adverts for Boots.

Does your programme feature more than one woman doing something positive? Then play Here Come the Girls on the soundtrack as lazy shorthand aimed at pin-brains who can’t cope with the fact that women can be serious and grown-up and have purpose and enthusiasms. Or can be called “women”.

This comment references the classic feminist argument against calling adult women ‘girls’: that it belittles, demeans and insults them by reducing them to the status of children. Some feminists will tell you that since ‘girl’ means ‘female child’, it should be reserved exclusively for people under the age of 16 (or 15, or 18–whenever the writer thinks childhood ends). But the reason I’m posting on this subject is because (with apologies to regular readers who’ve heard this line before) I don’t think it’s quite that simple.

If it were really that simple, it would be hard to explain why ‘girls’ is favoured over ‘women’ in contexts like those Boots adverts, where the intention clearly wasn’t to demean women (how would insulting the customer help to shift the product?) but on the contrary, to present them as strong, capable and ‘empowered’. Boots was actually trading on the development which has reignited this long-running controversy: in recent decades ‘girl’, once a reliable indicator of unreconstructed male chauvinism, has come to be associated with a certain kind of feminism.

This may have begun with the Riot Grrrl movement, with its slogan ‘girls to the front’. But while that was very much a young women’s thing, today’s ‘girls’ can be of any age. Think of Oprah’s use of ‘you go, girl!’ and Beyoncé’s ‘who run the world? Girls!’ Think of the recent rash of female-authored bestsellers with ‘girl’ in their titles (like Gone Girl and The Girl On The Train), or TV series like Lena Dunham’s Girls (in which the characters are young, but no longer children) and ITV’s current Kay Mellor drama Girlfriends (whose protagonists are considerably older). These are not cases of men patronising women: the new ‘girl’-users are women, and often they are self-identified feminists. So what are they doing with ‘girl’? Or, to put it another way, what is ‘girl’ doing for them that ‘woman’ can’t?

To answer that question we will need to let go of the idea that ‘girl’ is automatically demeaning because it infantilises women. Some uses of ‘girl’ may do that, and many uses of ‘girl’ are demeaning whether or not they do it (a point I’ll elaborate on later). But as a general explanation of how ‘girl’ works, the ‘it treats adult women as children’ argument is flawed and always has been, because it’s based on an overly literal account of what and how words mean.

Suggesting that ‘girl’ should only be used in reference to actual children is a bit like suggesting that ‘cold fish’ and ‘fish out of water’ should only be used in reference to actual fish. It misses the point that these are metaphors, figures of speech that work by transferring some of the qualities of one thing (a girl, or a fish) to another thing (a woman, or a human). The question is what aspects of the meaning of ‘girl’ are being transferred when the word is used in reference to adult women. The answer may be different in different contexts, and that may help to explain why some uses of ‘girl’ are perceived as demeaning, while others are positively embraced by women themselves.

One element of the context that can affect the meaning of a linguistic form is related to that hardy perennial of sociolinguistics, the distinction between status and solidarity. As I explained in a previous post, it’s not uncommon for the same linguistic form to communicate a different meaning depending on whether it’s being used ‘vertically’, to mark the speakers’ relative positions in a status hierarchy, or ‘horizontally’, as a mark of solidarity, intimacy or mutual respect between equals. For instance, if two people are in an intimate relationship, each may address the other with endearment terms like ‘darling’ and ‘sweetheart’, and in that context the terms are unobjectionable; but it’s another story when the same words are used non-reciprocally, by men harassing female strangers in the street, or by a boss to a female underling who is obliged to call him ‘Sir’ or ‘Mr Smith’. The first usage says ‘we love each other’; the second says ‘I have power over you’.

‘Girl’ can be used in both ways. British readers may remember the outcry last year after the Conservative MP Sir Roger Gale referred to his female office staff as ‘girls’ during an interview on national radio. This was a good example of the vertical, non-reciprocal usage: the staff members in question, all women of mature years, could hardly refer to Sir Roger as ‘the boy we work for’ (just as he wouldn’t feel able to refer to his own boss, prime minister Theresa May, as ‘the girl in number 10’). Another, notorious historical example is the way white Americans in the era of racial segregation (and before that, slavery) addressed African Americans as ‘girl’ and ‘boy’. This racist convention underlined the subordinate status of Black people, and was accordingly resented by them. But that hasn’t stopped African American women from adopting ‘girl’ as a solidary term among themselves. When it’s used horizontally it communicates something different—it’s about female bonding and mutual support.

For solidary purposes, ‘girl’ may seem preferable to ‘woman’ because it’s warmer and more intimate. It works in the same way as endearment terms, or the diminutives we often use as nicknames for the people we’re close to: between intimates, a name that metaphorically makes you ‘smaller’ is a mark of affection. But when it comes from someone with socially-sanctioned power over you, the same metaphor becomes a putdown, a reminder that you are seen as a lesser being.

If the horizontal use of ‘girl’ conveys warmth, closeness and female solidarity, that might explain why ‘girlfriend’ is so often preferred to the more distant-sounding ‘woman friend’. But the closeness/distance contrast doesn’t seem so relevant to cases like The Girl On The Train, or the various bits of mainstream media output which have been soundtracked with ‘Here Come the Girls’. In those cases we might think that ‘girl’ is preferred to ‘woman’ for other reasons–reasons which feminists might find more problematic.

One obvious difference between ‘girl’ and ‘woman’ is that ‘girl’ emphasises the quality of youthfulness and ‘woman’ the quality of maturity. In societies which are both sexist and ageist, however, maturity isn’t always seen as positive. So, when adult women refer to themselves and one another as ‘girls’, this may function as a form of avoidance, an attempt to block the less desirable associations of ‘woman’. A ‘girl’ is not, for instance, staid, careworn, ‘mumsy’, a domestic tyrant or a grim old battleaxe. She sounds less threatening than a ‘woman’, and more attractive—not only because of her imagined youthful looks, but also because of her supposed carefree attitude and her implied sexual availability. (It’s not a coincidence that we have walk-on, grid, podium and ring card ‘girls’ rather than ‘women’: women whose job is to project sexual availability are almost invariably referred to as ‘girls’.) Embracing ‘girl’, in short, is one way of dealing with the social fact that women’s value in modern western cultures is reduced rather than enhanced by age and experience.

Though ageism does not affect men in exactly the same way (getting older is not thought to render men sexually undesirable and therefore worthless), there are contexts where terms connoting youthfulness or juvenility are used by/about men as well as women, and often for similar reasons. For instance, we have paired expressions like ‘boys’/girls’ night out’, where the most relevant association of the juvenile term is with being carefree—participants are ‘boys/girls’ rather than ‘men/women’ because they’re putting aside adult responsibilities to concentrate on the pursuit of pleasure. (In that context, as the RadioTimes writer pointed out, ‘Here Come the Girls’ has an equally clichéd male equivalent, ‘The Boys Are Back in Town’.) ‘Boys’ can also have the same solidary function as ‘girls’: both terms are frequently deployed as expressions of camaraderie among same-sex workmates or members of the same sports team.

‘Girl’ is a more complicated word than it might seem. A blanket prohibition on using it to refer to anyone older than 15 would be a very blunt instrument, capturing not only the cases which are offensive, but also many which are innocuous, or even positive. Broadly speaking, ‘girl’ is suspect when it meets one or more of the following criteria:

It’s not surprising that the ‘girl’ terms which inspired this post—‘walk-on girl’, ‘grid girl’, ‘podium girl’, ‘ring card girl’—meet all these criteria: they are labels for women fulfilling a function whose very existence would be inconceivable without sexism. But if ‘girl’ doesn’t tick any of these boxes then I don’t think feminists should have a problem with it. We don’t do ourselves any favours by policing language for no good reason.