Skip to content
Cross-posted from: We Mixed our Drinks
Originally published: 24.02.16

This week, the Project 3:28 report on the numbers of men and women speaking at Christian conferences and events in 2015 was released – the third annual report produced since a small group of people got together – first in conversations on Twitter, and then over dinner – to talk about the way platforms are dominated by male speakers. All of us were interested in the issue of gender justice in the church; all of us were concerned that Christian organisations were not doing enough to represent a diverse range of speakers, gifting and expertise.
Three years on, I’m really encouraged by the conversations that Project 3:28 has started. I’m particularly encouraged by the organisations that have contacted the working group to let us know that they’re being proactive about finding more women to speak at their events. It’s clear to see that effort is being made, because these are the organisations appearing in the top half of all those ranked. One of our longterm aims for Project 3:28 is to be able to set up a database of women speakers, listing areas of expertise and experience, so we’ll no longer hear that ‘we didn’t know any women to ask’ or ‘we couldn’t find anyone’ – but in the meantime, seeing that certain organisations are committed to a more equal balance of speakers is a really positive step.
Last year, I talked about some of the common objections to the project and why we still believe it’s a valuable source of information. The fact remains that it is produced by volunteers, in our free time, completely unfunded. So this year I thought I’d talk about some observations I’ve had about this year’s statistics and questions people have asked on social media. 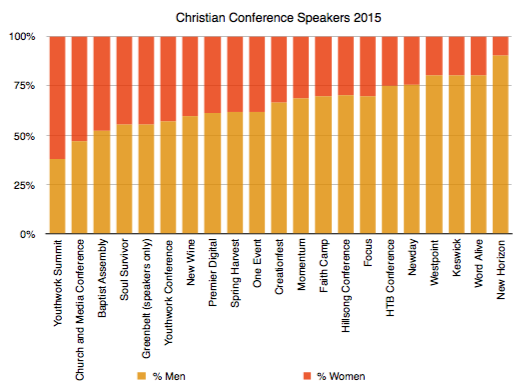 Yes, the events ranking lowest for gender balance of speakers are the ones that are openly more conservative
It’s clear, that despite small increases in the number of women speakers, that they’re probably going to continue to rank lowest because of their beliefs about the circumstances in which women are permitted to teach – even as some streams become more proactive about recognising the gifting of women and more open to them preaching and teaching.
But the events ranking not far above them are officially egalitarian – so what gives?
Some organisations have some catching up to do. This was something that particularly stood out for me when analysing the data from the Hillsong, HTB Leadership and Focus conferences. Having a basis of faith that says women can lead and teach doesn’t always translate to women actually doing these things. Sometimes that’s down to historical patterns of appointing leadership, how people are noticed and given prominence. Sometimes it’s because of old boy’s networks that rely heavily on in-crowds of people who socialise together, speak at events together, and are all on the same committees together. Sometimes it’s because of events looking for the biggest names on the Christian festival circuit to sell their programme to prospective attendees – names that are more likely to be male, because that’s how conference culture works. What’s clear is that those organisations whose theology is essentially egalitarian, but are low ranking, could do much better.
What about other elements of diversity?
Project 3:28 looks at the balance of men and women speakers. Someone asked us this week whether or not we know anyone specifically doing work on racial diversity at these events. We don’t – but we think it’s a really important thing to think about. We’ve explained that because of the way we compile the data, it would be more difficult to look at racial diversity because it’s much less easy to make a judgement about someone’s race from looking at their name on a programme. Just as the majority of conferences are male-dominated, they are also dominated by white speakers – that’s clear. They’re dominated by middle class speakers and able bodied speakers. So there is much work to be done in achieving diversity that reflects the church as a whole.
We haven’t covered every single event and conference here
That’s true. When we looked at the data for 2013, we started with a group of events based on what we could find at the time. We have stuck with this list to enable better comparison year on year. But we know there are numerous events that we have left out. Some people have already made suggestions of others we could look at next year. If you can see any we’ve obviously missed out, let us know!
What about the balance of men and women on the main stage versus seminars and smaller talks?
We chose not to include this data, again because so far we’ve stuck with what we can compare year on year. However, my counts differentiated between main stage speakers and other speakers and I can confirm what some people have asked: male speakers dominate ‘main stage’ sessions at festivals. At many events, women are also more likely to show up as speakers at sessions focused on subjects that have more traditionally been considered a woman’s domain – marriage, children’s work, family life, mental and emotional wellbeing. It’s not problematic in itself to see women speaking about these topics, but just as many women are gifted teachers on other subjects that are more likely to be seen as the preserve of male speakers.
The knotty problem of wives
Something we have looked at informally, and something people have asked us about, is the number of women present at festivals only as a ‘husband and wife act’. This varies quite a bit between the events, but we felt it was difficult to represent these numbers with integrity. Some women have a ministry with their husbands, some independent of their husbands. Some speak in their capacity as a ‘leader’s wife’. It’s difficult to make judgements about the data here without seeming critical about the women involved – and that’s not what we would want to do, at all, because we know they are gifted teachers and leaders in their own right. Our general feeling is that many events could be more committed to finding single women speakers, women who lead churches on their own and women whose husbands are not in ministry.
Things are improving…but there’s still some way to go
Women have the knowledge and the gifts. Organisations need to be more intentional about seeking them out and inviting them to speak.
We Mixed Our Drinks: I write about feminism, politics, the media and Christianity, with the odd post about something else completely unrelated thrown in. My politics are left-wing, I happily call myself a feminist and am also an evangelical Christian (n.b. evangelicalism is not the same as fundamentalism, fact fans). Building a bridge between feminism and Christianity is important to me; people from both camps often view the other with suspicion although I firmly believe that the two are compatible. I am passionate about gender equality in the church.  Twitter @boudledidge