Source: Wikimedia Commons. “”Hester Prynne & Pearl before the stocks”, an illustration by Mary Hallock Foote from an 1878 edition of The Scarlet Letter”

“She had not known the weight until she felt the freedom” – Nathaniel Hawthorne, 1850

Are we all born with scarlet letters, unseen until someone or something makes them visible? Like unlucky lottery scratch cards, a letter rubbed raw, eczematous, infectious: one for every woman who dares to speak out against rape and sexual assault. Nathaniel Hawthorne’s fictional character, Hester Prynne donned a red letter “A” for adultery, a signal of her deviant sexuality, a public warning, a badge of shame. Today, society has become that puritanical scarlet letterfor every woman, every victim, everyone who tries to take back the power and make a try for justice.

Victim blaming is the scarlet letter used by rape culture to marginalise women. It is as much an elaborate cross-stitch of (un)reasoned words as a flaming mark left by a phallocentric branding iron. In an article examining the problematic attitudes toward rape in Ireland, Amnesty International state that, in relation to low conviction rates for sex crimes, “It is clear. . . .that public attitudes to victims of rape are a significant part of the problem, and something the UN too said needed to be addressed. Rape, as with other forms of ‘gender-based violence’ against women, is directed at a woman because she is a woman. The underlying cause, according to the UN Declaration on the Elimination of Violence against Women, is the historical and ongoing discrimination against women by men. Also, these attitudes necessarily dictate how victims are treated subsequently.” As Hawthorne says of Hester’s scarlet letter, “It [the scarlet letter] had the effect of a spell, taking her out of the ordinary relations with humanity, and enclosing her in a sphere by herself.” Isolation, social exile, mockery, threats, even violence are some of what can face rape and sexual assault survivors who speak out against their attackers. 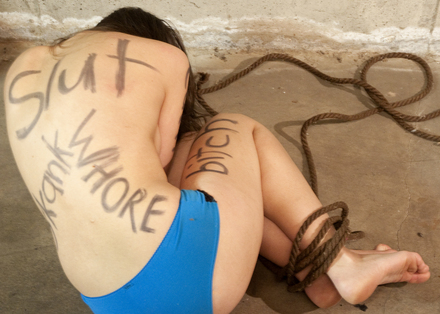 An accusation is worth a thousand brandings

Hester says to her daughter, “Hold thy peace, dear little Pearl! We must not always talk in the market-place of what happens to us in the forest.” What Hester was talking about is sexuality. Not much has changed for women since Hawthorne’s 19th century exploration of 17th century womanhood in Puritan America. We are not supposed to talk about rape, sexual assault, sexuality, or gender-based violence. An accusation is worth a thousand brandings leaving the victim mottled and worn by the collective prejudice of a society that is stunted by patriarchy, shackled to a medieval chauvinism, and hog-tied to ignorance.

There has been a surge of posts, articles and commentary about rape culture and victim blaming since the Steubenville rape case became global news. Many bloggers have compiled lists of why victim blaming happens, how it happens, and how to put a stop to it. Quite simply, we need to educate, improve our justice systems, and provide more support for victims of rape and sexual assault. As long as statistics like the ones below exist, we have an impossible task ahead of us. These figures are also the glaring reasons why education, justice and support are essential, yet lacking. 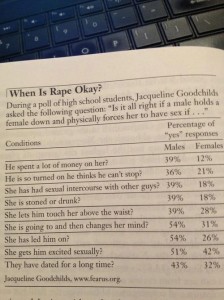