I’m writing this in the light of the recent celebrations over the Irish ‘yes’ vote for same-sex marriage.

….And by writing this I’m not judging or condemning anyone’s personal choices in terms of gay marriage. I have fellow gay friends who have recently married, something incredibly important to them and I utterly respect that.

I’m also aware of the obvious benefits of expanding the human rights of gay people in a homophobic society, of highlighting inequality and oppressive ideals.

However, focusing on ‘marriage’ as a form of equality for gay people, in my opinion, is misleading.

As a feminist, marriage is not something I endorse in heterosexual terms. It’s a patriarchal institution with an obvious connection to gendered oppression. It still reeks of crimes against women, of females being passed as if goods between men, of women being robbed of their rights and property, of women forced into undervalued and oppressive roles laced with impossible expectations, of female economic dependence, of state endorsed violation of female bodies, of legal violence and sexual violence etc……

In the light of this, viewing this as a positive institution I’d like to share in is bloody difficult! 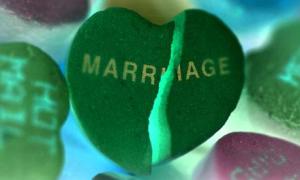 Obviously same-sex marriage would preclude these specific gendered oppressive circumstances. However it also creates a similar premise for a lack of autonomy for the individual, for abuse to occur (e.g. economic control of one partner by another), for roles and expectations etc, for isolation. It supports the idea of the ideal lifestyle in terms of a conveniently conservative model for living, …..the nuclear family…. family values…

….all wrapped up with state incentives…

and maybe we should ask ourselves why?

As a feminist I don’t want equality for women, I want liberation. There’s no such thing as equality under patriarchy and while women have grudgingly been allowed certain human rights over the past century, our overall oppression still remains. The same can be said about the gay and lesbian community. In the 1970’s we wanted gay LIBERATION, not tokenism, and certainly not offers of pseudo ‘equality’ by hetero blueprint……..

I find the push for gay marriage under the banner of ‘choice’ uncomfortable. …As for women and any oppressed groups especially, ‘choice’ can be an extremely loaded term. Do we really have freedom here? Or are we being sold this as ‘our choice’ – something which is in reality extremely limiting……?

Why be liberated when you can be ‘normal’??

Are we being guided away from exploring alternative and potentially more freeing ways of living and conducting our relationships? This could be particularly helpful for women as lesbian mothers e.g. exploring a more collective /communal approach to childcare for example….

And for all of us in terms of not viewing our relationships as often unrealistically lifelong monogamous commitments……  Or viewing long term relationships as necessitating neat models of cohabitation….. etc etc etc.

Again, if same-sex marriage is what individuals want, then of course I’ll respect our differing approaches and opinions. As a lesbian I wanted a YES vote in Ireland…..for any society to want to improve the rights of gay people is important.

However, I do think we should at least be questioning what’s on offer here.

When right-wing men like David Cameron are on your side its time to start asking yourself………….. WHY?

2 thoughts on “Why be liberated when you can be ‘normal’?? A lesbian proposing NO to gay Marriage…..”