Skip to content
Cross-posted from: The Psychology Supercomputer
Originally published: 23.09.13

Right, so that’s the disclaimer out of the way. 🙂
Before I explain the why. I suppose I’d better explain the what. What is the women in STEM issue. For those that don’t know STEM stands for Science, Technology, Engineering and Maths. And currently we have a problem in STEM subjects and careers. That problem is the low uptake of women. This is not just a recruitment problem, in fact you could argue it’s not a recruitment problem at all. Since girls tend to like and do well in STEM subjects through high school. The women in STEM problem is being referred to as the “leaky pipeline” – at each further stage of education and career progression the proportion of women to men drops. It starts at A-levels, with fewer girls doing a-level in STEM subjects despite out performing boys at GCSE level. Fewer still continue to study STEM subjects at undergraduate level, and fewer at post-graduate. This trend continues through career progression, for example in academia, after PhD, fewer women become lecturers, then fewer become senior lecturers; on and on. Women disappear. Despite clear interest and aptitude in STEM subjects they vanish. But we don’t know why. This is the women in STEM problem.
So, the why? The question raised in the discussion was why are we (as scientists, engineers etc. those involved in public engagement, the media, institutions and the government) placing such an emphasis on this problem?
For me, the answer here is self-explanatory but I’m going to try to break it down a little. According to the 2011 census roughly 51% of the UK population is female. A recent Guardian article reports that only 6% of engineers are female. So there a massive problem of under-representation. Women are half of the population, so we should make up substantially more of STEM than we currently do (even if we never reach half). This stands even without all the arguments about the benefits of having more gender balance in workplaces etc. but it is especially troubling when you consider that we are getting women in.
Let me use my own subject as an example, because it’s one of the rare ones with more female undergraduates than male. The undergrad population for Psychology is roughly 80% female. In fact males in a psychology classroom are a rare sight. As rare as females in some other STEM subjects. (I am not entering into ANY argument about if psychology is a science, it is. There is no argument). So you would imagine then that this gender balance continues throughout the career progression. (Again, I’m going to focus on academia, because that’s what I know, but this holds for other arenas/career paths too). Well, you’d be wrong! As you move up the career ladder, the ratio of women to men drops. Until, at professorship level the men outnumber the women. This CANNOT be due to a lack of ability. The probabilities that the only people good enough to make it to professorship are the few male psych PhDs are slim. So what’s happening? What is causing this drop off of women? Why are we losing women? It does appear that they are leaving, but again we have no idea why?
So, people have FINALLY started to notice this problem. The big STEM professional bodies, institutions, companies, and the government are noticing. People are beginning to see that we need to do some research, we need to address why these women are being lost and then find ways to keep them. For some of us, as women in STEM we are very vocal about this issue. We understand the need for role models and so we use whatever platform we have to get out there and say “I’m a woman in STEM, look at me, you could do this too!” We are involved in groups like @Science_Grrl and we contribute to discussions around this problem. We’re the minority, the small few (probably weirdos) that made it. That stuck it out. And we’d like to know what makes us different. We don’t want STEM to be seen as an old boys club. As something for men only, and so we push and shout. Amazing women have been doing this for some time and now, finally people are listening and taking notice.
So, there is this focus on the women in STEM problem. Money, time, research, media attention, all directed at understanding why women leave STEM and what we can do to prevent it. I always thought this was a good thing, in fact, I couldn’t see how anyone could see it any other way.
However, the argument I have been faced with is “we risk alienating other minority groups by focussing so much on women. If we tell people all we care about is women, then they’ll be left thinking that we don’t care about them. Like, what about people with learning disability or mental health problems?”.
OK, first – *screams*Right, now that is out of the way, let me calmly break this down for you. I do not believe that anyone who is currently focussing on the issue of women in STEM is unaware of the general issue of under-representation of minority groups. We are all to aware that STEM is pale, stale and male. I personally am passionate about not only dealing with the women in STEM issue, but also in encouraging kids from disadvantaged backgrounds into STEM. And race is a HUGE problem in STEM too, though I’m not going to deal with that, because it wasn’t raised.

WE CAN CARE ABOUT MORE THAN ONE THING AT ONCE!!!!! I’m not sure why this appears so difficult for some to wrap their heads around. But it is infuriating the frequency that this “what about this other thing” argument comes up whenever people begin to focus on issues faced by women. We are capable of understanding that there are many problems around recruitment into and retention in STEM subjects and careers. We are all intelligent, passionate people. We care about our subjects and we want to make it a better place for everyone. By making a bit of noise about one minority group, it doesn’t mean we don’t care about the rest. 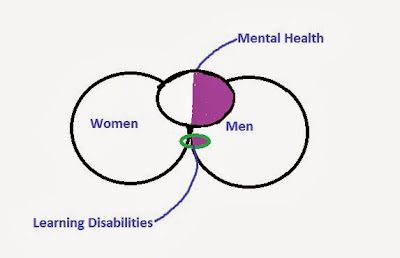 OK, so at this point, I’m probably sounding a little off. Like I don’t care about those “purple” people. Well, that’s not actually a true representation of my standpoint. I think it’s a fair argument though, and I think we need to keep some perspective on the scale of the issues that we are trying to address.
So, how do I see it? To me, it’s like this. STEM is a medical patient, faced with numerous problems leading to ill health. Each of these medical problems results from a different illness, with a different cause. In order to cure the patient, we need to diagnose each illness, suggest and find an effective treatment and then deliver that treatment. We CANNOT cure the patient of all of these illnesses just by administering one pill.
What I’m saying is that there are different reasons why women, those with learning disability, those with mental health issues, people of colour, those from lower SES backgrounds etc are not represented in STEM. We need to analyse these issues individually, in order to understand the specific obstacles faced by each of these groups in order to remove them. We can’t fix these problems just through recruitment, or outreach. We can’t stand there and say “STEM is awesome, woo!” and expect the problems faced by these people to vanish. We have to tackle these issues individually. That doesn’t mean though, that we can’t tackle them simultaneously. In fact, most of us are. Like I said earlier WE CAN CARE ABOUT MORE THAN ONE THING!!
The Psychology Super-computer I write about Psychology, Science Communication, Women in Science and feminist issues. I also tweet as @psycho_claire